The Paris-Roubaix Monument Classic took place on this date in 1901, 1912, 1957, 1963, 1968, 1974 and 2013. In 1901, the race started at Port Maillot for the first time since 1898 and motorpacing - riders cycling in the slipstream of a lead car or motorbike - was banned, though pacing by another bicycle or tandem would be permitted until 1910. The winner was the Swiss-born Frenchman Lucien Lesna, who would win again the following year. 1912 was won by Charles Creupelandt, who would win for a second time in 1914, and 1957 by Alfred De Bruyne who would win again the next year. 1963 was won by Emile Daems three days after his 25th birthday.

1968 was a year in which two of the most feared aspects in the history of the race made their first appearance: the first was Eddy Merckx, who achieved the first of the three Paris-Roubaix victories that would become some of the most impressive wins in a career that saw him widely recognised as the best cyclist of all time. The second was the Trouée d'Arenberg, the fast 2.4km cobbled section that had become known as the most challenging part of the race - and which has claimed several victims. Arenberg, roughly cobbled with uneven stones, was built to serve as a track along which equipment and material could be transported to and from the mines that lie deep below the surrounding forest and was first suggested for inclusion by 1958 Vuelta a Espana winner and 1962 World Road Race Champion Jean Stablinski, who had worked in the mines before he became a professional cyclist. Stablinski would later say, "Paris–Roubaix is not won in Arenberg, but from there the group with the winners is selected."

1974 may have been the first year that the 1.6km Verchain-Maugré to Quérénaing cobbled section was used - records are rather vague. The Trouée d'Arenberg, meanwhile, had been closed by the Office National des Fôrets and would not reappear in the race until 1984. The winner was Roger De Vlaeminck, his second victory in the race.

In 2012, Fabian Cancellara had been kept away from the race by a quadruple-fractured collarbone sustained at the Ronde van Vlaanderen a week earlier and Tom Boonen won; in 2013 Boonen was away with an injury and Cancellara - despite several crashes during practice for the race - won. Though far less decisive than Boonen's 2012 victory (he'd won by 1'39" following a long solo break), many fans considered Cancellara's to have been far more exciting: Cancellara had entered the Roubaix velodrome with Team Blanco (ex-Rabobank) rider Sep Vanmarcke and the pair put on a nail-biting display of tactics more commonly associated with track sprinting, virtually track-standing their bikes as they watched one another and waited to see who would go first. Vanmarcke did so but was immediately overpowered by the big Swiss rider, who sprinted past and took his third Paris-Roubaix victory. One week previously, he had also won the Ronde van Vlaanderen - only ten riders have ever achieved this, and only Boonen and Cancellara have done so on two separate occasions (Boonen in 2005 and 2012, Cancellara in 2010 and 2013).

The Ronde van Vlaanderen was raced on this day in 1985, 1991, 1996 and 2002. 1985 was held in some of the worst weather ever seen at the event with a storm that raged for most of the second half of the event and temperatures described by riders as "Siberian." Just 24 riders out of the 173 to start reached the finish line, enabling Eric Vanderaerden to claw his way to the front of the peloton after apparently exhausting himself when he rode at the front for 20km and he beat Australia's Phil Anderson by 41".

1991 brought further success for 1989 winner Edwig van Hooydonck when he beat Joan Museeuw by 45". Van Hooydonck retired a few years later when EPO was becoming the doping product of choice in cycling, saying that he couldn't remain competitive unless he too was to dope - which he refused to do.


1996 was won by Michele Bartoli who, also winning the Omloop Het Volk in  2001, Liège–Bastogne–Liège in 1997 and 1998, Züri-Metzgete in 1998, La Flèche Wallonne in 1999,  the Amstel Gold Race in 2002 and the Giro di Lombardia in both 2002 and 2003 would go on to prove himself one of Italy's greatest ever Classics riders. That year also saw the first appearance of an Under-23 race to replace the Amateurs competition that had first been held in 1936 (and which was won over the years by several riders destined for future success in the Elite race) - the first U-23 winner was Ludovic Capelle, who won again the next year.

The Elite race was won in 2002 by Andrea Tafi; Italians in the last two generations seemingly doing increasingly well in the French and Flemmish Classics where, traditionally, they have suffered - two years previously, he won Paris-Tours and a year before that Paris-Roubaix. The Under-23 winner was Nick Nuyens, who would win at Elite level in 2011, and the Dorp van de Ronde was Aarsele.

La Flèche Wallonne started on this day - the earliest in its 76-year history - in 1977. The parcours was 223km long, nearly identical to that of the last three years and would be used again with few alterations the following year. Francesco Moser won, beginning his long run of success in the Classics (he won Paris-Roubaix for the next three years in a row); finally laying to rest the belief that Italian riders rode well only in Italy - a belief that had existed since the early days of cycling, despite the fact that Fermo Carmellini had one this race in 1948 and Jules Rossi had won Paris-Roubaix in 1937.


Andy Hampsten
Shirus Andrew "Ernie" Hamsten, born in Columbus, Ohio on this day in 1962, came to widespread acclaim in 1985 when - as a virtual unknown - he won Stage 20 at the Giro d'Italia, which earned him a full professional contract with Bernard Hinault's La Vie Claire team for 1986. That year, he won the Tour de Suisse and came fourth overall in the General Classification at the Tour de France, also winning the Youth Category as he supported team leader Greg Lemond to his first Tour victory - the first time it had ever been won by a non-European rider.

In 1987, having switched to 7-Eleven, Hampsten again won the Tour de Suisse and two stages at the Coors Classic. The following year proved to be his best when he won Stages 12, 18, the King of the Mountains and the General Classification at the Giro d'Italia (the first and, at the time of writing, only time the race has been won by a non-European) - however, many of those who were there to see it will remember his incredible performance during Stage 14 as the high point of his career. Displaying the sort of strength against adversity that hadn't been seen since the days of Charly Gaul, Hampsten battled against a blizzard high on the Gavia Pass, one of the most testing sections of any Grand Tour, where more than 30cm of snow lay on the ground. At the summit, musettes filled with skiing clothes were being handed out to the riders to protect them from hypothermia on the descent. Erik Breukink passed Hampsten as he stopped to put them on, but he was soon in hot pursuit. In the end, Breukink was first over the line, but Hampsten had ridden so hard and so fast that he took the race leader's jersey - and kept it for the remainder of the race.

In 1992, Hampsten won Stage 14 on the Alpe d'Huez at the Tour de France, beating Claudio Chiappucci who was then at the height of his powers and would go on to become the overall King of the Mountains that year. In the same season, he won the Tour de Romandie and came 5th in the Giro, then he won the Tour of Galicia in 1993 before retiring at the end on 1994. With his brother Steve, he now owns and runs Hampsten Cycles of Seattle and operates Cinghiale Cycling Tours in Italy.

His nickname Ernie is commonly said to come from a resemblance to Barry Livingstone, the actor who played Ernie Douglas in the 1960s US TV show My Three Sons. However, Cyclopunk has been informed by no less reliable a source than Gary Fisher* that the name in fact comes from the Sesame Street characters Bert and Ernie. Only you, dear reader, can decide. 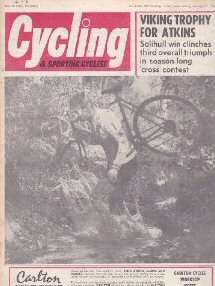 British cyclo cross rider John Atkins, who was born in Coventry on this day in 1948, was the son of the famous Edith Atkins who earned wordwide fame when she broke numerous endurance cycling records during the 1950s. John would become a rider of considerable note himself, winning his first National Cyclo Cross Championship in 1961 when he was only 19 years old. A stomach ulcer brought his career to a halt after he won second place the following year, but he recovered by 1966 and won the title again, keeping it for the next eight years. He came 2nd in 1975 and 1976, then won it back in 1977 and was 2nd again in 1978 before retiring to run a bike and toyshop in North Wales

Jack Bauer, who was born in New Zealand on this day in 1985, became National Road Race Champion in 2010 after spending his early cycling career riding mountain bikes, He switched to road cycling in 2007, later spending time in Belgium where he learned techniques from more experienced riders and began to won numerous races. Bauer holds a degree in physical education, is a born-again Christian and played bass guitar in the locally-successful rock band Dream Farm.

Jobie Dajka
On this day in 2009, police found the body of Australian track cyclist Jobie Dajka, one of four cyclists accused of being the co-owners of 13 phials of an equine growth hormone, injectable vitamins and medical equipment, including used syringes, by sprint and keirin champion Mark French. The drugs and equipment had been found in a boarding room used by French at the Australian Institute of Sport.

Florian Schneider-Esleben, a founder member of the seminal and cycling-obsessed German electronic music group Kraftwerk, was born in Düsseldorf in this day in 1947. Schneider left the group in 2008, having taken a typically-Kraftwerkian 40 years to discover artistic differences with co-founder Ralf Hütter.