Paris-Roubaix was held on this date in 1902. Having begun at Saint-Germain in 1900 and Porte Maillot in 1901, the race returned to its previous starting point at Chatou - where the start line would remain until 1914. The winner, Lucien Lesna, was born in Switzerland in 1863 but had taken French nationality before the turn of the century and as such is not considered the first Swiss Paris-Roubaix winner (they had to wait until 1923).

The Ronde van Vlaanderen was held on this day in 1958, 1959, 1969 and 1980. The 1958 winner was Germain Derycke - nowadays it's always one week before Paris-Roubaix, which Derycke won in 1953, but was two weeks before that year. The winning time of 6h7'00" was shared by all ten riders first over the line. Derycke had won Stage 23 at the Tour de France in 1951, but then became a Classics specialist - in between his Paris-Roubaix  and Ronde successes, he won La Flèche Wallonne and the Dwars door Vlaanderen in 1954, Milan-San Remo in 1955 and Liège–Bastogne–Liège in 1957.

The Ronde was held on the same date the following year, 1959, when Rik Van Looy won despite a crash on the Muur van Geraardsbergen. He too was a Classics specialist, but went further than Derycke by becoming the first man to win all five Monuments - a feat achieved since by only two other men, Roger de Vlaeminck (perhaps the greatest Classics rider of them all) and Eddy Merckx (widely claimed to have been the greatest cyclist of all time). Out of 143 starters, only 58 finished the race that year; one of the main reasons for that being the Valkenburg, featured in the race for the first time: climbing from 45m to 98m, the hill has a maximum gradient of 15%.

1969 brought the first of two victories in this race for Eddy Merckx, the Belgian superstar who is widely regarded as the most successful cyclist of all time. The race was run in awful weather with heavy rain and strong winds which proved too much for lesser men, so Merckx led for much of the race. Then - in search of revenge against the other riders who, like much of the cycling world at the time, spent a great deal of time jealously sniping at him because of  how many races he won - he launched a solo breakaway on the Muur van Geraardsbergen and rode the remaining 70km alone. When he crossed the finish line, he did so 5'36" ahead of 2nd place Felice Gimondi and 8'08" ahead of the chasing group that included the British rider Barry Hoban. However, this race was a challenge even for him and it would be six years before he won for a second time.

In 1980 Michel Pollentier beat some of the greatest Classics riders of all time, defeating Francesco Moser, Jan Raas, Roger de Vlaeminck, Marc Demeyer, Freddy Maertens and Gilbert Duclos-Lassalle in a final sprint. Oddly, Pollentier was not himself known as a Classics man, having performed best in long stage races and the Grand Tours - he won a total of six Grand Tour stages, twice finished the Tour de France in 7th place, finished the Vuelta a Espana in 6th position in 1977 and 2nd five years later and won the Giro d'Italia in  1977. 1980, the 64th held, was the last time the race was held in March. Since the race is now held on the 14th Sunday of the year to ensure it falls one week prior to Paris-Roubaix, it will never be held in March again as the earliest possible date is the 1st of April.

Gradually - as has often been the case with athletes who compete in other sports - Holden found that she enjoyed her cycling training more than any other part, and she became better on the bike as a result. However, it wasn't until 1992 when she relocated to Colorado and began training with the US Cycling Team that she decided to concentrate on cycle racing rather than triathlon. The next year, she entered the National Time Trial Championship and finished in 6th place.

In 1994 she sustained a spinal compression fracture, thus bringing a temporary halt to her new career, but a year later she won the National Time Trial and set a new American 40km time trial record at 51'36.24", also winning the Louisville Criterium and the Point Mogu Criterium and coming third in the presitigious Redlands Bicycle Classic. She won the Time Trial Championship again in 1996 and in 1998, 1999 and 2000, thus becoming the first US female cyclist to win the title for three consecutive years - and she won the Road Race Championship as well in 1999. She won the World Time Trial Championship in 2000.

In 1998, she won the Mountains Classification at the Women's Challenge, repeating that result in 1999 and developing her abilities so far that she was able to win the Mountains at the 2001 Giro Donne. Today, Holden uses her considerable expertise to run cycling training camps and clinics, also acting as a consultant to companies manufacturing women-specific bikes and components and to the cycle racing world in general. She has also served as athlete's ambassador to USADA. 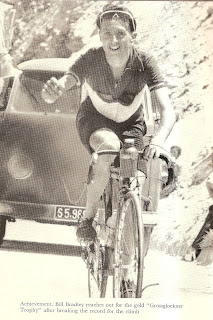 Bill Bradley
Bill Bradley, born on his day in 1933, received a suspension from the National Cycling Union in 1958 after he was found to have competed abroad without their permission, but was then invited back to take part in the Berlin-Warsaw-Prague race later than year. He won the Tour of Britain - at that time known as the Milk Race as it was sponsored by the Milk Marketing Board in return for the words "Drink More Milk" embroidered n the jersey of every rider - in 1959 and again in 1960.

Bradley is notable in that he remained an amateur - probably so that he could avoid the NCU rule stating that once a rider had been a professional he could never race against amateurs again, even after retirement - for ten years until he was finally tempted by an offer from Falcon Cycles, and for his Stage 6 victory at the 1957 Österreich-Rundfahrt when he set a race record time for climbing Austria's highest mountain the Großglockner in 56'53" - a record that stood for many years and which beat one set six years earlier by none other than Charly Gaul, perhaps the greatest climber to have ever lived.. He died on the 30th of June 1997.


Laurens Schmitz Meintjes, born in Aberdeen, South Africa on the 12th of July 1868, was the winner of the first ever World Stayers Championship at the ICA Track Cycling World Championships in Chicago, 1893. He died on this day in 1931.

Jean Fischer, born in France on this day in 1867, was nicknamed Le Grimpeur, which suggests he specialised in climbing. However, he won the Paris-Tours, a race over relatively flat parcours that had first been held in 1896 and was originally run every five years, in 1901. In 1903, he finished the first ever Tour de France in 5th place, 4h58'44" behind winner Maurice Garin.

On this day in 2007, Rebecca Romero - who had already enjoyed a successful career as a professional rower - made her international competitive cycling debut at the UCI Track World Cup in Moscow. She won a silver medal in the 3km Pursuit.