The Ronde van Vlaanderen was held on this day in 1928 and won by Jan Mertens, who retired from cycling three years later when he suffered a double fracture to his elbow. The finish line was moved to Wetteren, where it would remain until 1942.

On this day in 1876, Frank Dodds covered 15.85 miles (25.51km) on his penny-farthing at the Cambridge University athletics ground - the first recorded attempt to set an Hour Record. 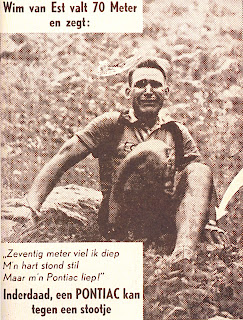 Wim van Est, who was born in Fijnaart, Netherlands on this day in 1923, began his cycling career not as a racer but as a smuggler, using his bike to carry illicit tobacco. When he was caught, he spent several months in prison - but it seems that fleeing from the law gave him a good set of legs because as early as 1947 he won the Saarland Rundfahrt, a race held intermittently in Germany between 1928 and 1950, and during his first professional year in 1949 he became National Track Pursuit Champion and won Stage 5 at the Ronde van Nederland.

His results through 1950 were good enough to earn him a place on the Dutch National Team in 1951 and, having broken away from the peloton with a small group earlier in the race, he was first over the finish line for Stage 12 with an advantage over the main field of 18 minutes.

Other Dutchmen had won stages before, but van Est was now race leader and thus became the first Dutch rider to wear the yellow jersey. The next day, he got his second entry in the annals of Tour lore: as he chased the stage leaders down the difficult descent from the Col d'Aubisque, he either went to fast for his ability or - as he insisted - got a puncture in his back wheel. He lost control as the bike slewed over the road and, with him still aboard, plunged into a ravine.

Time stands still whenever something like this happens as team mates, support crew and spectators are reluctant to look over the edge for fear of seeing a smashed corpse lying far below them. However, when they did they were greeted by the site of van Est looking back up at them - he had fallen between 30 and 70m (reports vary widely), yet was somehow unharmed. He later described the experience: "I was lucky because I undid the pedalstraps just before I started to descend. When I fell I kicked my bike away and held my hands over my head. In a few seconds I saw my whole life. My fall was broken by some young trees and I caught one of these trees."

He tried to climb back up to the road but couldn't, so his manager called for a rope - but nobody nearby had one, so they had to improvise one by tying together the team's entire supply of spare tyres. With that, they managed to pull him out and got him into the ambulance that had by now arrived, but he climbed back out and went looking for a bike so he could finish the the stage. Before he could find one, he was persuaded that it might not be such a bad idea to go to hospital just to be checked over and, regretfully, he abandoned the race. The tyres had been stretched and ruined so when they were unable to secure any more, the rest of the team also had to abandon what became - with Hugo Koblet's historic eventual win and Mont Ventoux in Stage 17 and the mountains of the Massif Central all making their first appearance in the race - one of the most eventful Tours of all time.

That death-defying plunge turned out to be highly profitable for van Est. The Dutch team had been supplied with watches by Pontiac, better known as a car manufacturer, who knew a good advertising opportunity when they saw one. Thus, the rider earned a decent income appearing in adverts with the slogan "Seventy meters deep I dropped, my heart stood still but my Pontiac never stopped!" The remainder of his cycling career wasn't bad either - he win Stage 16 at the 1953 Tour, Stage 4b in 1954 and was 8th overall in 1958. he also won a further eleven National Championship titles, Bordeaux-Paris in 1952 and 1961 and the Tour of Flanders in 1953. He was 80 when he died on the 1st of May, 2003.


Michael Wright
Michael Wright was born on this day in 1941 in the Hertfordshire town of Bishop's Stortford. His father was killed during 1941 and his mother later remarried a Belgian soldier and took her family to live in Liège. Naturally athletic, Wright's preferred sport during youth was football, but when his stepfather also died he became the family's breadwinner - and if a young athlete wants to support his family by making a living from sport, he needs to get a bike.

Wright would later claim that his British nationality was responsible for his entry into prestigious races because while he wasn't nearly good enough to join the Belgian superstars on their teams, the British had to make do with riders in a lower class - including him. That left him in an unusual position - having spoken French for the majority of his life, he was an English rider who needed to take English lessons so he'd be able to communicate with his team mates. Thus, he became a member of the team during the period between 1964 and 1974 when Britain enjoyed the most success it had ever had in cycling up until recent years. It was also the period during which Tom Simpson died - Wright won Stage 7 that year, but abandoned in Stage 11, two days before his team mate's death on Mont Ventoux.

In all, he rode eight Tours and finished seven of them, winning three stages in total (Stage 20, 1965; Stage 7, 1967; Stage 10, 1973) with his best overall result 24th in 1965. He also entered the Vuelta a Espana, winning Stages  2 and 4 in 1968 and Stages 1 and 13 in 1969, with a best result of 5th in the General Classification and 2nd in the Points competition. After retiring from racing, he worked as an ice-cream salesman for Ijsboerke, the company that sponsored his last team in 1976, and owned a team of his own for a short period.

Matteo Carrara, born in Alzano in Italy on this day in 1979, won the Tour of Luxembourg in 2010. His greatest love after cycling is mathematics.