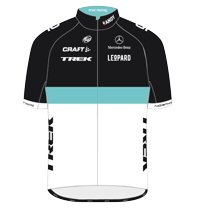 With a roster including some of the biggest names and personalities in professional cycling, big name sponsors (in addition to Trek, they were supported by LuxAir, Oakley and Mercedes Benz, among others - Mercedes supplying them with team cars which finally ended Jaguar-sponsored Sky's monopoly in the unofficial Poshest Support Vehicles stakes), the snazziest website in the ProTour and a team bus that looked like an unusually luxurious space shuttle, the stage looked set for Leopard Trek to dominate in the Grand Tours and other stage races.

Unfortunately, the team was beset by first tragedy and then bad luck. Tragedy came when Wouter Weylandt, aged just 26, crashed and was killed on a fast descent in the Giro d'Italia; an accident that contributed a great deal to the demise of Giro director Angelo Zomegnan, who was accused of neglecting rider safety in his quest to equal the Tour de France. Then Andy didn't perform quite as well as everyone was expecting him to do around France, even managing to lose some of his previously-loyal fans after getting a bit whiny following a damp and dangerous descent from the Col de Manse into Gap at the end of Stage 16 (coming so soon after Weylandt's death, he can perhaps be forgiven even if he did sound a bit pathetic at the time). In Stage 18, he pulled off what many people called one of the best victories in recent years with a splendid solo breakaway on the slopes of the Galibier, reaching the summit finish 2'07" before brother Frank who took 2nd place, but even that wasn't enough to give him the advantage he needed after some really quite lacklustre rides earlier on in the Tour and he was left unable to hold off Cadel Evans in Stage 20, when the Australian won the race.

Fabian Cancellara wasn't having his best year either. Having earned himself the reputation of World's Greatest Ever Time Trial Rider (look up Beryl Burton to find out why he wasn't), he seemed unable to light the same fire in his legs and was roundly beaten by Highroad's Tony Martin every time they faced one another. However, he was the team's most successful rider, capturing podium places at a number of races including two stages at the Tour de Suisse, 2nd at Paris-Roubaix and 3rd at the Tour of Flanders. Jens Voigt, meanwhile, was making his way through the year in his characteristic manner, attacking anything that moved and riding like a hooligan on a stolen bike before charming the entire world with his pleasant manners, affability and articulacy when off the bike. He was a favourite to win the Tour of Britain, arriving at the race as team leader, but had to abandon after crashing and breaking a finger in the first stage. And he didn't just break it a little bit, either - being Jens Voigt, he completely smashed it to bits and needed emergency surgery to save it.

If we take a look from Leopard Trek's point of view, the year was not entirely wothout point: let's not forget that although the biggest prize slipped their grasp, Leopard riders took 3rd place at the Tour of Qatar (Bennati), 1st and 3rd at the GP Samyn (Klemme und Wagner), 10th at Paris-Nice (Monfort), a stage at Tirreno-Adriatico (Cancellara), 2nd and 10th at Milan-San Remo (Cancellara and O'Grady), 1st in the Critérium International (Frank Schleck), 1st at E3 Harelbeke (Cancellara), 2nd at Ghent-Wevelgem (Bennati), 3rd at the GP Miguel Indurain (Wegmann), 3rd in the Tour of Flanders (Cancellara), 2nd at Paris-Roubaix (Cancellara), 4th in the Amstel Gold Race (Fuglsang); 2nd and 3rd at Liège-Bastogne-Liège (Frank and Andy); 1st and 4th at the Tour of Luxembourg (Gerdemann and Monfort) plus one stage (2, Gerdemann) and the prologue (Cancellara), two stages in the Tour de Suisse (1 and 9, both Cancellara) and 4th and 7th overall (Fuglsang and Frank), Stage 18 in the Tour (Andy) and 2nd and 3rd overall (Andy and Frank), the Team Time Trial at the Vuelta a Espana and, finally, 1st place overall at the Giro di Lombardia (Oliver Zaugg, his first major win).

So it wasn't such a bad year, all in all, for Leopard Trek; they just didn't live up to the hype that others created around them. 2011 proved to be their first and last year as, at the end of the season and following widespread rumour, it was confirmed that the team would merge with RadioShack for 2012.

Belinda Goss
Born in Devonport, Australia on this day in 1984, Belinda Goss started cycling when she was 13 and marked herself out as a rider to watch when she won a bronze medal in the Scratch race at the World Junior Track Championships in 2002; a year later she proved she had serious potential on the road as well with a stage victory at the Geelong Tour.

In 2004, Goss hit the big time with two golds (Points, Scratch) and a bronze (Keirin) at the Oceania Games, all taken at Elite level. These were followed in 2005 with two bronze (Under-23 Scratch, Elite Scratch) and a silver (Elite Points) at the National Championships and another bronze in the Elite Scratch at the Moscow round of the World Cup, then third place at the Bay Classic and two more bronze (U-23 and Elite Scratch) at the National Track Championships the following year. 2007 proved to be her real breakthrough year, both on road and track - she began the season with a Stage 2 victory and second place overall at the Bay Classic, then won Stage 2 and second place overal at the UniSA Criterium season, picked up a gold medal for the Elite Points race at the National Track Championships, came second in the Points and the Scratch at the Manchester round of the World Cup and won Stages 2 and 3 and third place overall at the Tour of Chongming Island. In 2008 she was second overall again at the Bay Classic and successfully defended her National Points Champion title before winning the Noosa Criterium, then in 2009 won the Points race at the Nationals again as well as coming third in the Scratch at the World Championships. She won the National Points Championship for a fourth consecutive time in 2010, also becoming National Scratch Champion and coming third again in the Scratch at the Worlds.

Since 2011, Goss has concentrated on road racing and has continued adding good results. She was fifth in the road race at the Oceania Championships that year and performed well at the Czech Tour and Giro della Toscana, then came third at the Rapha Elite Criterium in 2012.


Antonio Suarez, Overall and Mountains Classification winner of the 1959 Vuelta a Espana, died on this day in 1981. Very unusually for a rider with the capability of winning a Mountains title, he also won the Points Classification two years later, the same year he finished 3rd overall in the Giro d'Italia behind Jacques Anquetil and Arnaldo Pambianco. Suarez appears to have been one of those Mediterranean riders who performed well only in the Mediterranean climate, for his Tour de France results appear at first glance to be those of a lesser man: his most notable finish was 17th in 1960, while he came 64th in 1958 and 43rd in 1963.

The Welsh professional and ex-British Junior Champion Yanto Barker was born on this day in 1980. Yanto was the highest placed British rider in the the 2005 Tour of Britain. In 2013, Barker won the Kirkcaldy and Stoke-on-Trent rounds of the Halford's Tour Series and the Ipswich and Coastal GP.

Happy birthday to Stephen Cox, the retired New Zealand cyclist born in 1956. Cos was hugely successful in races in his homeland, winning ten major events between 1978 and 1984. He also won a bronze medal at the 1984 Commonwealth Games.

Mattei Montaguti, twice an Italian National Champion and a winner at the Giro della Provincia di Reggio Calabria was born today in 1984. He came 2nd in the Mountains Classification at the 2011 Vuelta a Espana, then won the classification at the Tour de Suisse in 2012. He has ridden for AG2R La Mondiale since 2011 and will remain with them for 2014.