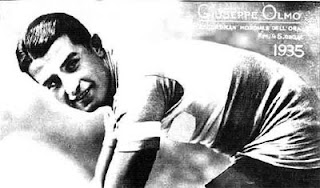 Guiseppe Olmo was born today in 1911 in Celle Ligure. During his professional career, he would win a total of twenty stages at the Giro d'Italia (including ten in 1936, when he finished in second place overall), Milano-Torino, Milan-San Remo twice and the Giro dell'Emillia. In retirement, he proved a canny businessman; setting up the Olmo bike manufacturer with which he would produce an enormous variety of low-cost, low-quality bikes that sold in enormous numbers and financed the development of some excellent top-end racing bikes. Under his leadership, the firm would branch out into different areas and became the Olmo Group. It still exists today and still makes bikes, motorbikes and a range of other products. Olmo died on March the 5th, 1992.


Happy birthday to the Columbian cyclist Fabio Parra, born on this day in 1959. Parra won stages in both the Tour de France and Vuelta a Espana, coming third overall in the 1988 Tour - which would remain the highest ever result by a South American rider for a quarter of a century, until Nairo Quintana's superb second place behind Chris Froome in 2013. His two younger brothers, Humberto and Ivan, were also professional cyclists.


Johny Schleck, ex-Luxembourg National Road Race Champion, winner of a stage in the 1970 Vuelta a Espana and a competitor in seven Tours de France was born on this day in Assel, Luxembourg, in 1942. He's the father of Frank and Andy.


David Clinger was born on this day in Los Angeles in 1977. In 2010, he fell foul of a USADA dope test that revealed synthetic testosterone and Modafinil, a drug said to increase endurance. The rider received a two-year ban which was later extended to a lifetime ban as the test had been carried out while he was still suspended from a previous positive test that had shown traces of Clenbuterol.


Happy birthday to Michael Vink, 2011 New Zealand Under-23 Road Race champ, who was born in Christchurch on this day in 1991.