Igor González de Galdeano
Born in Vitoria-Gasteiz, Euskadi on this day in 1973, Igor González de Galdeano signed his first professional contract with Equipo Euskadi in 1995. At that time, the team was in its second season and experiencing financial hardship due to sponsorship problems; the results he achieved during his three years with them helped to attract new backers, setting the team on the road to becoming the legendary Euskaltel-Euskadi that is still racing today and has become the default National Team of the cycling-mad Basque people.

In 1999, his breakthrough year, he moved to Vitalico Seguros-Grupo Generali and won a stage before finishing fifth overall at Tirreno-Adriatico; he then took part in his first Grand Tour, the Vuelta a Espana, where he won the Prologue and Stage 12 to finish second overall and third in the Points competition. In 2001 he went to ONCE-Eroski and rode his first Tour de France, finishing the Prologue and Stage 18 in second place before coming fifth overall. A Stage 9 win - setting an average speed of 55.17kph over the 179.2km parcours which was, at that time, a Grand Tour record - later in the year at the Vuelta proved he was a worthy opponent to Lance Armstrong, who had won the Tour for a third time a few months previously; in 2002 he confirmed it with another fifth place at the Tour after wearing the maillot jaune between Stages 4 and 10, a victory at the National Individual Time Trial Championship and a bronze medal at the World ITT Championship.

González de Galdeano could not race at the Tour in 2003 after an anti-doping test revealed traces of salbutamol - this was not considered a positive result by the UCI and he was not banned from competition by them, but the French cycling federation banned him from racing in France for a six-month period that included the Tour. At the Vuelta that year he won Stage 1 and was fourth overall; however, in 2004 when ONCE had become Liberty Seguros, it became apparent that he had reached the end of his best years - he came 44th at the Tour and 96th at the Vuelta. 2005 was no better and he failed to finish the Tour before taking 89th at the Vuelta. A month and a half later, on this date - his 32nd birthday - he announced his immediate retirement. "I realised in the last Tour de France that I lost my motivation," he said.


Born in Bülach, Switzerland on this day in 1944, Louis Pfenninger won the Tour de Suisse in 1968 and 1972. In 1967 he was second overall at the Tour de Romandie and later becamee National Individual Time Trial Champion (1970) and National Road Race Champion (1971). As well as Romandie, he rode the Tour de France in 1967 and finished two stages in the top 20 before coming 70th overall.

Hendrik Redant, born in Ninove, Belgium on this day in 1962, was a professional rider between 1987 and 1997; during which time he won Kuurne-Brussels-Kuurne (1988 and 1990), the Colombian National Cross Country Mountain Bike Championship of 1990, Paris-Tours and the Japan Cup (1992) and the GP Briek Schotte (1994). He also took part in the Tour de France in 1990 (when he finished three stages in the top 20 and came 150th overall), 1991 (three stages in the top ten, 140th overall), 1992 (three top 20 stages, 122nd overall), 1994 (six stages top 20, 93rd overall) and 1995 when he didn't finish. Following his retirement from racing, Redant became a directeur sportif at Omega Pharma-Lotto and remained with them until 2010 when he moved on to the ill-fated Pegasus team based in Australia - the team folded due to financial difficulties before the start of the 2011 season 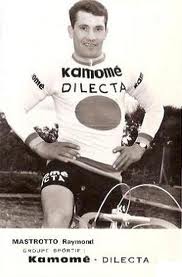 Raymond Mastrotto, born in Auch, France on this day in 1934, won the Under-23 Route de France in 1956 and 1957, then came sixth overall at the Tour de France in 1960. In 1961 he was second at the Critérium du Dauphiné and the following year he won it; he then went for several years without major victories until the Tour de France in 1967, where he won Stage 17 - which would prove to be the last win of his career because, in 1968 while out on a training ride, he was hit by a car and had to give up cycling. He died only 16 years later, aged 49, in 1984.

Elina Sofokleous, born in Cyprus on this day in 1978, was National Road Race and Individual Time Trial Champion of Cyprus in 2001 and National Cross Country Mountain Bike Champion from 2004 to 2007.

Henk Vogels Sr., born in Haarlem, Netherlands on this day in 1942, came second at the Australian National Road Race Championships in 1973. His son, Henk Vogels Jnr., was also a professional cyclist who rode between 1995 and 2008.

Jef Lowagie, who was born in Brussels on this day in 1903, was Amateur National Road Race Champion of Belgium in 1933.

Alexander González Peña, a road and track rider born in Cali, Colombia on this day in 1979, was National Pursuit Champion in 2003.

Tony Hurel, who was born in Lisieux, France on this day in 1987, raced for two seasons as a trainee with Bbox-Bouygues Telecom, then joined Europcar in 2011; at the close of the 2013 season, he announced that his contract had been extended for a fourth year. Hurel won the Junior Ronde des Vallées in 2005, took Stage 6 at the Canadian Tour of New Caledonia in 2007, won the Under-23 Vuelta Madrid in 2008, the Circuit de la Vallée de la Loire in 2009, the Circuit des Plages Vendéennes 2012 and in 2013 he was seventh at the Tour de Normandie and fourth at the Arctic Race of Norway.