Fred Rompelberg, born in Maastricht on this day in 1945, has attempted and set numerous cycling speed records - including 268.831kph drafting behind a dragster car at Bonneville Salt Flats on the 3rd of October in 1995, which remains the non-roller, flat terrain world record. Now aged 68 and in possession of a full UCI racing licence, he is officially the oldest professional racing cyclist in the world. 2014 will be his 43rd year as a professional.

Ramona d'Viola, born in Chicago on this day in 1958, was selected for the US national team in 1985 and took 38th place at the Tour de France Féminin that year. She has also been active in sailing (including as a crew member in the America's Cup) and in paddleboarding, in 2004 captaining the first women's team to successfully cross the Florida Straits following an aborted attempt the previous year and is a veteran of the US Army Marines and an acclaimed photojournalist.

Wolfgang Wesemann, born in Elbeu on this day in 1949, was Amateur Road Race Champion of East Germany in 1972. 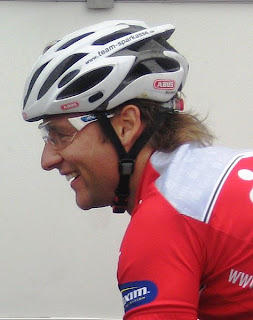 Christian Lademann, who was born in Blankenberg, East Germany on this day in 1975, won numerous road and track events in the late 1990s and first decade of the 21st Century including a stage at the Peace Race and several National and World titles. In 2009, when new testing procedures were applied to samples taken from athletes at races in the past, Lademann was shown to have been positive for EPO. He had by that time retired and did not request that the B-sample provided at the same time be tested.

Mieczysław Wilczewski, who was born in Lwow, Ukraine on this day in 1932 to Polish parents; he later became a resident of Poland and won the Tour of Poland in 1953. Years later he moved again to the USA, where he died in 1994.