Claude Rouer, born in Paris on this day in 1929, rode with Jacques Anquetil and Alfred Tonello in the Team Road Race at the 1952 Olympics, months after he'd finished the Amateur National Road Race Championships. The team won a bronze medal and Rouer was invited to turn professional with the Mercier-A. Leducq team - however, other than second place at a race called the Boucles de la Gartempe, Rouer's first season was not at all successful and he became Lanterne Rouge at the Tour de France. The following year he managed to find a place with La Perle-Hutchinson, but when that year passed without notable results his short-lived professional career came to and end.

Lauren Tamayo, born in Barto, Pennsylvania on this day in 1983, was US Under-23 Road Race Champion in 2005 and rode with the winning team at the National Team Pursuit Championship in 2012. In 2013, she rode with Exergy-Twenty16; she will move to United Healthcare for 2014. 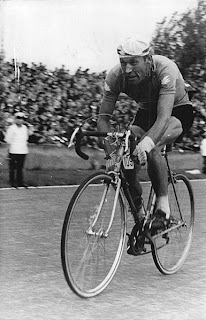 Viktor Kapitonov, born in Kalinin, USSR on this day in 1933, was National Road Race Champion in 1958 and won the Indvidual Road Race at the 1960 Olympics. Over the course of his career, Kapitonov won four stages at the Peace Race; he was also one of the very few Soviet athletes to get a chance to compete against the West's professionals, as in 1962 when he finished third in the General Classification at the Tour de Saint-Laurent in Canada and in 1963 when he took second place at the end of Stage 4 at the Tour de l'Avenir.

Mark Gornall, a British rider born on this day in 1961, won the GP Faber and Lincoln International in 1989 and Stage 6 at the Milk Race in 1991. He also rode at the Olympics in 1988, placing 62nd in the Road Race. Following his retirement from competition, Gornall became a farmer at Pendleton in Lancashire; in 2007 his name once again appeared in the news after a barn collapsed while he was inside it - he escaped with minor cuts and bruises.

Petrus "Piet" Michaelis van der Horst, born in Klundert, Netherlands on this day in 1963, won a silver medal when he rode with the Dutch pursuit team at the 1928 Olympics.