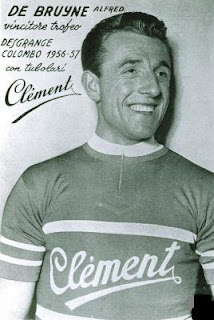 Alfred de Bruyne, born in Berlare, Belgium on this day in 1930, became the dominant Classics and Monuments rider of the late 1950s. Like many Classics specialists, his powerful sprint made him a formidable stage winner too, though he never stood a chance of challenging the General Classification of the long stage races: winning the Independents Ronde van Vlaanderen in 1953 earned him a place at his first Tour de France - he finished Stage 5 in 3rd place. The next year, he won Stages 8, 13 and 22.

In 1955, de Bruyne finished two stages at the Tour in the top three and was second at the Giro di Lombardia. In 1956 he won Liège-Bastogne-Liège, Paris-Nice and Milan-San Remo, then came second behind Louison Bobet at Paris-Roubaix before winning Stages 2, 6 and 10 at the Tour. He also won the Desgrange-Colombo, a season-long competition run by L'Équipe, Het Nieuwsblad/Sportwereld, La Gazzetta dello Sport and the now-defunct Les Sports newspapers that formed an early version of today's UCI ranking system; he would win it again in 1957 and 1959 - the Swiss Tour de France winner Ferdinand Kübler had won it three times too, but de Bruyne is the only rider to have won it three times consecutively.

De Bruyne could ride well on the track too, winning the Six Days of Gent with Rik van Steenbergen in 1957 prior to achieving one of the rarest and most prestigious doubles in cycling: winning the notoriously difficult Ronde van Vlaanderen and then, a week later, Paris-Roubaix - a feat that in almost a century (Paris-Roubaix began in 1896, the Ronde in 1913), only ten other riders have managed. He finished the season with victory at Paris-Tours, then got 1958 off to a good start when he won Liège-Bastogne-Liège and Paris-Nice for a second time. In 1959 he won Liège-Bastogne-Liège again and was second at the Omloop Het Nieuwsblad. From that year, de Bruyne's performance began to tail off and in 1960 he won only one event, a derny race at Zedelgem. The following year was to be his last as a professional rider, but he went out on a high with victory at Kuurne-Brussels-Kuurne.

De Bruyne retained his links to cycling after retiring, writing books on the careers of van Steenbergen, Rik van Looy, Patrick Sercu, Peter Post and himself - they were well-received and remain worth seeking out today. He also served as a manager, later an official spokesperson, for the Ti-Raleigh team when it was at the the height of its legendary success, then became a TV sports commentator before his death aged 63 in 1994.


At the 2012 Giro d'Italia where his NetApp team made their Grand Tour debut, Daniel Schorn (born in Zell am See, Austria on this day in 1988), managed to avoid a crash 400m from the Stage 5 finish line and then out-sprinted several older and more-experienced sprinters to take fifth place. In 2013 he managed three top 20 finishes at the Vuelta a Espana; now aged 25, he seems a rider to watch in the coming years.

Luke Parker, born in Melbourne, Australia on this day in 1993, rode with the winning Sprint team at the Junior National Championships in 2010 and 2011. In 2012 he won the Austral Wheel Race, the oldest track competition still held anywhere in the world; in 2013, riding with the OCBC Singapore Continental team, he won Stage 2 at the Tour of the Philippines.