Eileen Sheridan
Born Eileen Shaw on this day in 1924 and growing to a height of only 1.5m, Eileen Sheridan enjoyed sports in her childhood and by the age of 15 had settled on cycling as her chosen discipline. She did not, however, show any interest in racing; when she joined the Coventry CC in 1944 she did so purely to take part in touring - despite having ridden a 10-mile time trial in 28'30" ("to the great amazement of the club as well as myself," she said) as early as 1940. In 1944, however, she was persuaded to take part in a race that was subsequently cancelled; a year later she took part in a 25-mile time trial and hoped to complete it in 1h15' - she did it in 1h13'34", thus winning the race and setting a new club record. Then she won the National 25-mile TT Championship, and the competitive bug bit hard.

Sheridan married in 1946 and gave birth to a son, returning to cycling seven weeks later and, in another five months, winning a club TT event. Within a year she'd set a new 50-mile personal best at 2h22'53" and won the Birmingham and Midlands Track Championships. Then when she was given a new, top-quality racing bike for her birthday in 1948 she set about making a real impact: in 1949, she won the Best British All-Rounder and set a new British Women's 12-hour record of 237.32 miles; only four men achieved a greater distance, the greatest - set by Des Robinson - bettered Sheridan's by only six miles. She won the BBAR again in 1950, also taking the 25 and 50-mile National Championships and setting a number of new records, and won the Bidlake Prize "for creating a new high standard in women's cycle racing with an outstanding series of three championships and five record performances."

In 1951, Sheridan began her career as a professional rider with Hercules (shortly afterwards, Hercules also took on Derek Buttle who, four years later, would form part of the team that Hercules sent to the Tour de France - the first British team in the history of the race). The company's plan was to sponsor her in 21 record-breaking attempts, receiving media coverage from those in which she was successful. They got their money's-worth - she broke all of them, in most cages by very high margins. One of them - 1,000 miles in 3 days and an hour - remained intact until 2002. Five others have yet to be beaten.

Lucien Petit-Breton
Born Lucien Georges Mazan in Plessé on this day in 1882, Lucien Petit-Breton moved with his family to Argentina when he was six. Some time in 1898/9, he won a bicycle in a lottery competition and began racing under the false name Louis Breton so he could keep his sport secret from his father who wanted him to get a "proper job."

Despite taking Argentine nationality, Mazan was drafted into the French Army in 1902 and returned to his native country to serve. He continued racing, winning the Bol d'Or in 1904, but had to change his name once again, adopting Petit so avoid confusion with another (now forgotten) rider named Lucien Breton. In 1907, he won the first Milan-San Remo and then entered the Tour de France. By the end of Stage 5, he was far down the leadership and appeared to have no chance of a good result - the race was decided on points in those days and, while Petit-Breton was in second place, leader Emile Georget was way ahead. Then, in Stage 9, Georget's bike broke and he had to finish on a replacement. Since the rules of the day demanded that riders fixed broken bikes without assistance unless the bike had been declared beyond repair by judges, which it had not, he was fined 500 francs. Then, in Stage 10, organisers rather unfairly decided that their previous decision was an insufficiently harsh punishment and docked him 44 points by relegating him to last place for the stage - putting him in 3rd place overall and Petit-Breton in first, a position he held for the remainder of the race.

A year later, Petit-Breton won Paris-Brussels, the Tour of Belgium and a second Tour of France, including Stages 2, 7, 9, 11 and 14 - and thus became the first rider to win two Tours, since Maurice Garin had been disqualified and stripped of his second win for cheating in 1904.

Petit-Breton served as a bicycle messenger in the French Army during the First World War and died on the 20th of December in 1917 when he crashed into a car near the front at Troyes. In 1978, six decades after his death, he became the hero of a rather peculiar episode of the TV drama series Les Brigades du Tigre in which he was played by Jacques Giraud. In it, two detectives are assigned to follow the 1908 Tour where a mystery man has been murdering cyclists, leading most of them to want to abandon the race for their own safety. Petit-Breton, meanwhile, is far braver than the rest and manages to persuade them to continue. The series is available on DVD but, to be fair, is only really worth seeking out by obsessive Petit-Breton fans, if such people still exist. 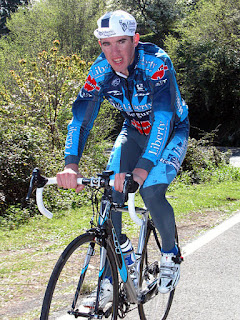 Born in Barakaldo, Spain on this day in 1977, Isidro Nozal won a silver medal at the National Novices Championship in 1992 and turned professional with ONCE in 1999, beginning to take good results within a year - including third place on Stage 10 at the Giro d'Italia in 2001. In 2003 he won Stages 6 and 13 at the Vuelta a Espana and was second overall - the best Grand Tour result of his career - and the following year he was seventh overall.

Unfortunately, it seems that Nozal's achievements were not entirely honourable: in 2005, he was banned for two weeks after a suspiciously high haematocrit count recorded at the Critérium du Dauphiné. He was implicated in Operacion Puerto a year later but was cleared of involvement, but then in 2009 he and team mates Hector Guerra and Nuno Ribiero were discovered to have used EPO variant CERA at the Volta ao Portugal; all three received two-year suspensions. He has not yet made a return to the sport.

Nozal is primarily famous not for his race results but for his belief that water softens the muscles, which is why he refuses to shower during races. Several other riders have confirmed that, during a Grand Tour, his presence in the peloton is unmistakable as a result.


Anna Sanchis Chafer, born in Genovés, Spain on this day in 1987, won the Junior National Individual Time Trial Championship in 2005 and the Elite National ITT and Road Race Championship in 2012. She began her professional career with Comunidad Valenciana in 2007 and remained there for two seasons, winning the Trofeo Xerox Ega in 2008 - the year she was also 19th in the Road Race at the Olympic Games. In 2009 she moved to Safi-Pasta Zara-Titanedi and experienced a year without victory, switching to Bizkaia-Durango - where she remains as of the end of the 2013 season - for 2010, but again enjoying no success. In 2011, however, she won a silver medal in the National ITT Championship and began the winning streak she's still enjoying - in 2013, she was National ITT Champion for the second consecutive year

Jure Kocjan, born in Slovenia on this day in 1984, won Stages 1 and 3 at the Tour du Limousin in 2012, where he rode with Team Type 1-Sanofi. In 2013 he moved to the Basque team Euskaltel-Euskadi; the team (not for the first time in its history) faces an uncertain future due to its difficulties in finding sponsorship at the end of the season, and it is not yet known if it will exist in 2014 nor for which team Kocjan will be riding.