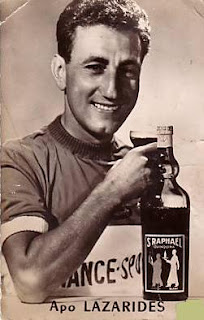 Born Jean-Apôtre Lazaridès in Marles-les-Mines on this day in 1925 and of Greek heritage (his family did not receive French citizenship until he was four years old), Apo Lazaridès fell in love with cycling during his boyhood and would regularly go on long rides to the mountains and then rode up them when he got there. During the Second World War he began racing as an independent and won two events, Boucles de Sospel and Mont Chauve; using his training rides as cover, he secretly acted as a courier for the Resistance, transporting messages between different groups. Had he have been caught he might well have been summarily executed on the spot, if not he'd have been transported to a concentration camp; his heroic actions are all the more remarkable when one considers that he was a teenage boy.

When the War ended L'Auto, the newspaper edited by Jacques Goddet that had created and ran the Tour de France, stood accused of collaboration with the Nazis (Goddet's politics were at times questionable, but he had permitted the newspaper's presses to be used to produce pro-Resistance material and so the accusations were perhaps not entirely deserved) and was closed down - though to all intents and purposes it continued after moving across the street into premises owned by L'Auto and being renamed L'Equipe, which sought to continue as Tour organiser. However, a rival paper argued that since it had not faced the same charges, it should be "given" the Tour; the government was uncertain as to which would make the better job of it and in 1946 gave permission for two races to be held - L'Equipe's La Course du Tour de France, which Lazaridès won, was declared the victor. He would never win an actual Tour, but came second in the King of the Mountains in 1947 and 1948, losing to Pierre Brambilla - who is said to have buried his bike in his garden in protest at Jean Robic's General Classification victory that year, swearing that he would never race again (but did) - the first year and Gino Bartali - who, like Lazaridès, engaged in anti-Nazi activities during the War, in his case personally transporting Jewish Italians over the Alps into neutral Switzerland - the next.

Lazaridès is primarily famous more for an incident said to have occurred in 1947 than for his considerable racing success. That year, he rode at the Tour for France Sport-Dunlop, led by 1934 King of the Mountains René Vietto (according to many - probably misguided - fans, Vietto was the "moral winner" of the General Classfication too. To find out why they thought so, and why he wasn't, click here). The story goes that when Vietto had to have an infected toe amputated that year, he demanded that Lazaridès cut off one of his own toes too. Initially, Lazaridès protested: "But why? I don't need to lose a toe." "Because I say so," Vietto replied - and, legend has it, Lazaridès carried out the order. It's common knowledge that his toe was then preserved in a bottle of spirits which is kept to this day in a bar in Marseilles; unfortunately, nobody knows which bar and attempts to locate it have failed (but it's both a good story and a very good excuse to try to visit all the bars in the city should you ever visit, so who cares whether it's true or not?)

Manolo Saiz
Born in Torrelavega, Spain on this day in 1959, Manuel "Manolo" Saiz Balbás is one of the few examples of a directeur sportif/team general manager who does not himself have a background as a competitive cyclist. Nevertheless, his career has been enormously successful and he developed ONCE into one of the biggest teams in the sport; he has also been at the centre of a number of controversies.

The secret to Saiz's success was slimming down his team's infrastructure, then reorganising management and coaching in order to maintain greater control over it. Having identified and chopped out the dead wood, he was able to generate funds to take on new experts and riders; with good results came more sponsorship money and the best riders in cycling - in 1995, ONCE riders took three places in the General Classification top ten, first place in the Points competition, third place in the King of the Mountains and first place in the Teams competition at the Tour de France. During the early 1990s, ONCE had dominated the Spring races with a series of victories at La Flèche Wallonne, Paris-Nice and others, from 1995 (when it also won the Points and King of the Mountains) to 1997 it won the Vuelta a Espana three times consecutively.

In 1998, when the Festina Affair broke as the Tour de France was beginning, Saiz withdrew ONCE from the race in protest at the organisers' handling of the situation, claiming to have "stuffed a finger up the Tour's arse." This was the first big controversy in which he was involved and, the following year when the Tour banned several individuals and teams from taking part after they were implicated in the Affair, Saiz and ONCE were among them. However, lawyers working for ONCE member Richard Virenque pointed out that UCI rule 1.2.048 stipulated organisers must notify those it sought to ban at least 30 days before the beginning of a race; they had not done so in this case and were forced to allow Saiz to enter his team - they came second in the Teams classification, no doubt leaving the Tour's top brass apoplectic with rage. Thus began several years of enmity between the two parties.

Saiz faced several crises in the years subsequent to 1999, but prevailed in each of them. In 2001, team leader Abraham Olana - who had won the 1998 Vuelta - left; meanwhile, Joseba Beloki was ready to take his place and became a real threat to the domination of Lance Armstrong until his career-ending crash on the Cote de La Rochette in 2003 (Armstrong, in order to avoid the crash, veered off the road and crossed a field - one of the most famous incidents in the Tour in recent years). Then, at the end of 2003, ONCE withdrew its sponsorship, arguing that the brand's profile had reached 100% penetration in Spain and that further advertising was therefore unnecessary; though cycling was still suffering from damage done to its reputation by the Festina Affair, Saiz was able to secure new funding from Liberty Mutual, a worldwide insurance company. Most riders remained on board, but Saiz also brought in new talent - including a young Alberto Contador, riding with his first professional contract. He couldn't always come out on top, though: when Roberto Heras failed an anti-doping test whilst en route to a record fourth Vuelta victory, Saiz had no alternative but to ban the rider.

Finally, on the 23rd of May 2006, Saiz's luck ran out - having been named during the Operacion Puerto investigations, he was arrested and resigned from his position as manager. Liberty then withdrew its sponsorship, though by the end of the season Saiz had officially listed Astana (a consortium of Kazakh companies) as his team's new main sponsor. However, in December that year the UCI declined to renew the ProTour licence held by Active Bay, Saiz's company, effectively shutting it down; the licence was then awarded to Astana.

Whilst the UCI and ASO (owners of the Tour de France) probably hoped to have seen the last of Saiz; until 2011 it looked as though they'd got their wish - Saiz claimed to have no desire to return to the sport in any capacity and was apparently content to concentrate on his wedding catering and restaurant business. Then in 2010, he began coaching an Under-23 team, Cueva el Soplao, and early in 2011 he posted a message on Twitter reading: “On the 11th of the 11th of 2011 something will happen.” Ideas among fans as to what this might mean varied widely with some expecting shock news relating to Puerto while others expected him to announce a new team. He later confirmed that the latter was the case, explaining that it would be a small outfit with young riders. It appears that he has not been able to find sponsorship as easily as he once could - in May 2012, he sold his collection of 57 (though the description said 70) rare and, in some cases, unique bikes on Ebay with a starting bid of US$50,000.

Mayuko Hagiwara, born in Maebashi, Japan on this day in 1986, won the Road Race at the Asian Games in 2006, was National Individual Time Trial Champion in 2009, 2010, 2011 and 2012 and National Road Race Champion in 2010, 2011 and 2012. In 2013, she made the move into the European cycling scene with the British-registered Wiggle-Honda team owned and managed by Rochelle Gilmore, and proved herself more than up to the task doing admirable domestique work. She also took a bronze medal at the Japanese National Championships that summer.

On this day in 2013, Albert Bourlon died at the age of 96. Bourlon, a professional rider between 1937 and 1951, escaped the peloton at the start of Stage 14 in the 1947 Tour de France and then successfully stayed away for the remainder of the 253km parcours - the longest successful breakaway in Tour history.

François Pervis, born in Château-Gontier, France on this day in 1984, was National Kilo Champion in 2005, 2006 and 2007 and National Sprint Champion in 2012. He has also won a number of Under-23 National and European titles.

Sam Bennett, born in Wervik, Belgium on this day in 1990 and of Irish nationality, became Irish Junior Road Race Champion and won the Junior Tour of Ireland in 2008, then also won the Points race at the European Junior Track Championships. In 2009 he won a stage at the Rás Tailteann, then another at the Rhône-Alpes Isère Tour in 2010, when he also became Under-23 National Championship and earned a traineeship with Française des Jeux. Since 2011 Bennett has been a professional rider with An Post-Sean Kelly; he was fifth in the National Championships that year and, in 2012, finished top ten on three stages at the Tour of Britain and took tenth place at the Under-23 World Championships.

Born in Morialmé, Belgium on this day in 1888 (and not to be confused with the philosopher and Breton nationalist of the same name, born in Brest 19 years earlier), Émile Masson won a bronze medal at the Independents National Championships in 1913, then signed up to Alcyon in the following year and was second at the Ronde van België. The First World War brought an end to the careers of many cyclists, but Masson was more fortunate and survived the conflict, making a return to racing in 1919 when he won the Ronde van België in 1919 and was second at Paris-Brussels. In 1920 he was fifth in the General Classification at the Tour de France. In 1921 he was again second at the Ronde van België, then a year later he took third place at Paris-Roubaix and won Stages 11 and 12 at the Tour de France. He won the Ronde van België for a second time and was fifth at Liège-Bastogne-Liège in 1923, retiring in 1925 after coming 22nd overall following his final attempt at the Tour de France. Masson's son, Émile Masson Jnr., also became a professional rider and, while he never did as well in the Tour, was more successful with victory at La Flèche Wallonne, Paris-Roubaix and two National Championships.