Cyril Horn
Throughout the history of cycling, there are numerous riders that came to the sport from speed skating; this is especially true in the Netherlands where speed skating is very popular and the best-known example of the phenomenon, Marianne Vos, was born - but there have been British speed skaters-turned-cyclists too. 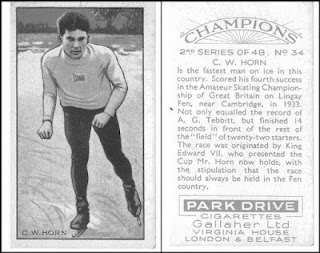 East Anglia maintained cultural and commercial links with the Dutch for many years. Many of the commercial links still remain, such as the busy shipping route between Rotterdam and Felixstowe (as well as the less obvious but undoubtedly busy covert cannabis shipping routes), so too do some of the cultural links - houses built in the Dutch style can be found throughout the region, and a few phrases that don't exist elsewhere in Britain can be heard on the other side of the North Sea where they apparently first came from. The Dutch influences were brought over by drainage engineers who came to help turn the marshy Fens into productive agricultural land, and in doing so killed off the malarial mosquitoes that once infested Norwich, Ipswich and Cambridge; they also taught the locals that during the winter, when the land was not under crop, areas could be flooded so that they froze and formed open-air ice rinks. For many years, skating on them was an enormously popular winter sport in Norfolk, Suffolk and especially in Cambridgeshire.

Cyril Horn was born in Upwell, a village that sits on the border between Norfolk and Cambridgeshire, on this day in 1904. After leaving school at the age of 12 he went to work in the family smithy making horseshoes, a profitable business at the time as the Army were sending vast numbers of horses to the First World War; toughened up by the hard work, Horn became a successful skater and won numerous national championships, also skating at the 1924 Olympics. He and his brother Dennis probably took up cycling to help maintain his fitness during the summer and almost immediately became as successful in velodromes, on the grass tracks and in cyclo cross (which was another Dutch import that was very popular in the region at one time) and many fans expected them to be selected for the 1936 Olympics in Berlin; however, neither were - Cyril later revealed that they had preferred to stay at home anyway. (For an excellent history of the Horn brothers and their achievements in skating and cycling, see Classic Lightweights.)

John Forester
Born in Dulwich, London on this day in 1929, John Forester moved with his family to California in 1940. He later earned a place studying physics at the state university but left with a degree in English, then joined the Navy before returning to California to become an engineer and academic. He had been a keen cyclist since early childhood; when his father, the novelist and creator of Horatio Hornblower, C.S. Forester, died leaving an unexpectedly large estate (thus revealing to the family that he had lied to them about his wealth for many years and that he had been living a secret life including a secret marriage), Forester found himself with the means to devote the rest of his life to cycling advocacy and became a renowned expert on the science of cycling.

Forester is best-known today for his books Bicycle Transportation (MIT Press ISBN 0-262-56079-8) and Effective Cycling (MIT Press ISBN 0-262-56070-4). In them, he is deeply sceptical about the benefits of many aspects of cycling infrastructure, including segregated cycle lanes. Both remain standard texts for students of many cycling safety programs; they should be read by every cyclist.


Ruggero Ferrario, born in Milan on this day in 1897, won the first ever Coppa Bernocchi in 1919 and a gold medal in the Team Pursuit at the 1920 Olympics.