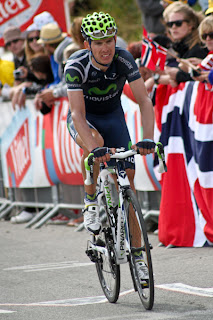 Born in Póvoa de Varzim, Portugal on this day in 1986, Rui Alberto Faria da Costa turned professional with the Benfica team in 2007 after achieving good results in the Volta ao Portugal do Futuro in 2005 and 2006, and won the Giro delle Regione and Volta a Madeira that year. He stayed with them in 2008 and came second at the Tour de l'Avenir, then went to Caisse d'Epargne where he has remained ever since (the team is now known as Movistar).

In 2009 he won the Four Days of Dunkirk and the GP Credito Agricola and was second at the National Road Race Championships, then in 2010 he became National Individual Time Trial Champion and rode his first Tour de France. He was 73rd, but later came fourth in the Gala Tour de France - a Luxembourgian event and criterium that celebrates the Tour (and was not held in 2012 after 2011 winner Frank Schleck failed a dope test). In 2011 he won the Vuelta Ciclista a la Comunidad de Madrid and later Stage 8 at the Tour as the only remaining rider from a breakaway that had led the race for almost the entire stage, just beating Philippe Gilbert and eventual overall winner Cadel Evans to the line. The following year he won the Tour de Suisse; his best Tour de France result was 14th on Stage 9 and he was 19th overall.

Costa was third overall at the Tour de Romandie in 2013, then won the Tour de Suisse for a second time following a long battle with BMC's Matthias Frank, who held the race leader's jersey and a 13" advantage at the start of the final stage, an individual time trial. In that stage, Costa won enough time to finish the race with an advantage of 1'02"; Frank dropped to fifth place, 1'43" behind. Five days later, Costa won the Portuguese Individual Time Trial Championship, then went to the Tour de France where he won Stages 16 and 19, neither of which were time trials and came 27th in the overall General Classification. The Gala Tour de France was back on that year; this time, Costa won.

In 2013, one week before his 27th birthday, Costa became the first ever Portuguese World Road Race Champion. He will race for Lampre-Merida in 2014. 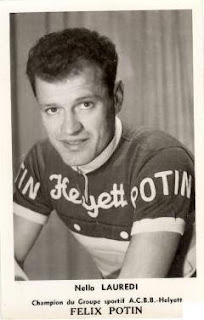 Born in Mulazzo, Italy on this day in 1924, Nello Lauredi won the Critérium du Dauphiné in 1950, 1951 and 1954 - he was also second overall at Paris-Nice in 1954. He achieved good results in the Tour de France, winning Stage 7 in 1950 then Stage 3 and wearing the maillot jaune for four days in 1952, Stage 13 and eighth place overall in 1953 and seventh place overall in 1957. Despite his Italian birth, Lauredi raced for France; he officially took French nationality in 1984.

Carl Otto Schutte, born in Kansas City, USA on this day in 1887, competed at the 1912 Olympics where he won bronze medals in the Individual Time Trial and the Team Road Race.