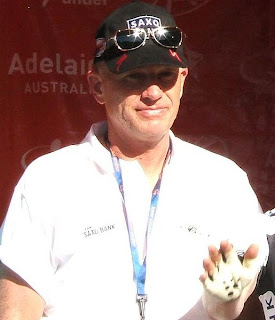 Kim Andersen
Born in Malling, Denmark on this day in 1952, Kim Andersen became the first Dane to wear the maillot jaune of the Tour de France when he led the race for five days early in the 1983 edition]. He also won Stage 12, but by that time trailed too far behind the leaders in the General Classification. In 1984 he won La Flèche Wallonne, and in 1985 he once again wore the maillot jaune at the Tour, this time for three days.

He tested positive in 1987, the year he became National Champion, and was banned from competition for life; this was later reduced to one year but in 1992 he tested positive again and was sacked by his team, Z. After continuing as an independent to the end of the season, he retired. Andersen worked as a directeur sportif with various teams after 1998, including CSC from 2003. There, he first met the Schleck brothers and went with them to LeopardTrek for the 2011.

Andersen became known as the Schleck's directeur sportif of choice - which, in view of his doping history, would inevitably raise questions, especially when Frank tested positive for the diuretic (used to increase production of urine, thus reducing the concentration of performance-enhancing drugs in it and making them harder to detect) xipamide at the 2012 Tour de France (during 2013, RadioShack-Nissan announced that it would not be renewing Frank's contract when his ban expired. This was not the first time Frank had been named in connection to doping; in 2008, it was alleged - and subsequently confirmed - that €7000 had been paid from his bank account into one owned by none other than Eufemiano Fuentes, the doctor at the centre of the Operacion Puerto scandal ; Andy has never failed a test nor been linked to doping, and it has been widely noted that the brothers have not been as close as they once were). He was at the centre of a row following the team's merger with RadioShack in 2012 when general manager Johan Bruyneel refused to let him work with the brothers at the Tour de France; however, Bruyneel was sacked by the team in October of that year following USADA's investigations into doping at US Postal which subsequently led to the disqualification of Lance Armstrong's seven Tour de France victories. Two months later, Nissan announced that they no longer wished to be associated with the team and ended sponsorship, then in 2013 Trek bought full ownership of the team from Leopard SA, a company owned by Flavio Becca; it is not known if Andersen will be a part of the new outfit.

2008 Fleche Wallonne winner Kim Kirchen, who rode for a number of professional teams between 1999 and 2010 including Highroad and Katusha, is named after Andersen - Kirchen's father Erny, who won the Fleche du Sud in 1973, is a friend of the Dane.

Born in Copenhagen on this day in 1962, Brian Holm was a super-domestique who won the National Individual Time Trial Championship in 1990 and later became manager of the national team. He admitted in his autobiography in 2002 that he had doped during the 1990s, then in 2007 that he twice used EPO during his time at Team Telekom; but was not sacked from his management position. Holm, who recovered from colon cancer in the mid-2000s and created a company that raises funds for cancer charities, has worked closely with British sprinter Mark Cavendish and is said to be a great motivational influence upon him.

Nico Verhoeven, who was born in Berkel-Enschot, Netherlands on this day in 1961, was Amateur National Champion in 1984 and won Stage 1 at the Tour de France in 1987.