Alison Sydor
Born in Alberta on this day in 1966, Alison Sydor discovered cycling while studying at the University of Victoria and went on to become one of the most successful Canadian cyclists of all time, enjoying numerous victories in road racing, mountain biking and cyclo cross.

Rik van Steenbergen
Belgium has produced an inordinate number of great cyclists. Among them, of course, is Eddy Merckx, the most successful rider of all time with some 525 professional victories; Rik van Steenbergen, who was born in Arendonk on this day in 1929, is widely considered to be one of the best of the rest. He came from a poor family and, like so many before and since, learned to ride fast on an old, heavy delivery bike that came with his first job as a delivery boy; then began racing at the age of sixteen.

Within a few years, van Steenbergen had become known as one of the strongest Junior riders in the country. After winning the sprint at the National Track Championships in 1942, he turned professional with A. Trialoux-Wolber for the 1943 season - and won 17 races, including the Elite National Road Race Championship, then in 1944 he became the youngest man in history to win the notoriously tough Ronde van Vlaanderen. It became apparent early in the race that he was going to win - as soon as the riders set off, it was obvious to all that not only was he on perfect form, he was having the sort of day that all cyclists dream about in which his body worked in perfect unison with his machine. He remembered years later that it had been the best ride of his life: "I could do whatever I liked, ride better than anyone," he said. "In the end I was with Briek Schotte and Enkel Thiétard. They were happy just to follow me. We made an agreement. I said that they could stay with me until we got to Kwatrecht. I wouldn't drop them provided they'd do their best to work with me. They were happy with that. They didn't have a choice. Under the bridge at Kwatrecht I just got rid of them."

1945 brought a second National Road Race Championship victory, 1946 brought seventeen victories including a second Ronde van Vlaanderen and he took a bronze medal at the World Road Race Championship. 1947 was a quieter year with "only" eight victories, then in 1948 he won Paris-Roubaix, the race that many riders consider the hardest of them all, setting an average speed whilst doing so that also netted him the Ruban Jaune, a prize established by Henri Desgrange to recognise the rider who set the fastest averag in a race more than 200km long during any one year (he chose yellow for the same reason the leader's jersey in the Tour de France is yellow: his L'Auto newspaper was printed on yellow paper). His average was 46.612km - a new record, which stood until 1955, three years after he won the race for a second time in 1952.

Van Steenbergen became World Road Race Champion for the first time in 1949, the perfect end to a year that saw him win fifteen races including the Waalse Pijl and Stages 12 and 21 at the Tour de France. He was very much a one-day and Classics specialist, but this would not be the only time he did well in a stage race - in 1950, he won three stages and the overall General Classification at the Tour de l'Ouest as well as Stages 1 and 15 and second place overall at the Giro d'Italia; two years after that he won four stages and the General Classification at the Vuelta a la Argentina, Stages 6, 9 and 10 at the Giro and Stage 1 at the Tour. He also won Stage 9 at the Giro in 1953, then Stages 5, 16, 17 and 22 at the same race in 1954 - earlier in the year he had won Milan-San Remo, and later in the year he would win another National Road Race Championship. In 1956 he won Stages 1, 7, 8, 11, 14, 17 and the overall Points competition at the Vuelta a Espana, then became World Road Race Champion for a second time, successfully defending the title in 1957 after going back to the Giro to win Stages 1, 11, 17b, 20 and 21.

In 1958 he won 27 races including a second Waalse Pijl, another National Road Race Championship and the European Madison Championship, the latter apparently encouraging him to begin competing in more track races - he defended the Madison title and added the European Omnium title in 1959 (and won 17 road races), then kept the Madison title until 1961 (winning a total of 37 road races during the two intervening years. He eventually retired, after 23 seasons racing at the top level of the sport, in 1966; he slowed down a little over the last four years but still won another 18 races. Estimates vary widely, but some claim that he won around 1,000 races over the course of his career. Some put it much higher - author Les Woodland says he won 1,314 races on the track alone.

There's an old saying: "how the mighty fall." It couldn't be more true than when applied to van Steenbergen. During his professional career, van Steenbergen had a reputation for being astute with his money; René de Latour revealed that he played the stock markets. Van Steenbergen later said that his biggest mistake had been not finding a job to fill the gap left by cycling when he retired, instead spending twelve years doing little while gambling satisified the need for excitement that the stock markets once had. He became addicted, squandering his wealth and ending up in such a poor financial state that he was reduced to starring in a pornographic film to earn money. Later he became subject of a police investigation when he was suspected of "incitement to debauchery," conspiracy and drug trafficking and even went to prison for a short while. When his wife left him he began drinking heavily and spent much of 1966 to 1970 drunk. Fortunately, he fell in love again, this time with a British woman from Wigan named Doreen Hewitt and, with her help, defeated his addictions and rebuilt his life, then found a new job and happiness. He lived for another 33 years, dying at the age of 78 on the 15th of May in 2003.

Freddy Bichot
Freddy Bichot, born in Saint-Fort, France on this day in 1979, was the surprise winner at the National Amateur Championships in 2002 - where very few riders and fans had ever heard of him - just like that he became famous and was offered a trainee contract with La Française des Jeux. Unfortunately, he'd find more fame a short while later when it was revealed that he'd tested positive for testosterone, having apparently decided that he'd spent enough time as an obscure amateur and that a chemical shortcut to professional racing was the way to further his career. He was banned for one year. 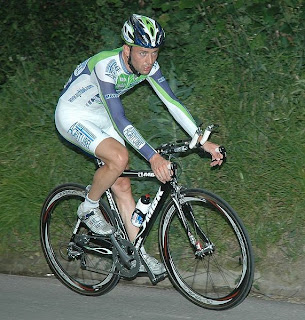 When the ban expired, Bichot returned to amateur racing but was rapidly picked up by Barloworld, the returned to what was now named fdjeux.com for 2004. He rode the Giro d'Italia that year but abandoned before Stage 10 then, having won Etoile de Bessèges early in the season, went back in 2005 and abandoned before Stage 14. In 2006, he made no impact at the Vuelta a Espana; then in 2007 he took a step down into the ProContinental ranks with a switch to Agritubel, who received a wildcard entry to the Tour de France that year - and, suddenly, things started falling into place: he finished Stage 12 in 11th place and Stage 20 in 12th (he won the Combativity award for the stage), both respectable results, then came second on Stage 3 at the Tour of Britain later in the year. In 2008, however, the promise faded: he won the Boucles de la Mayenne, but his best Tour result was 25th on Stage 21 and he was far down the list on the majority of other stages, finishing in 135th place overall.

Bichot remained with Agritubel in 2009, achieving four victories that year, then moved to BBox-Bouygues Telecom for 2010 and 2011 with two victories in the latter year. He has been racing for Continental team Veranda Rideau in 2012 and won the Trophée des Champions  and the Sprints classification at the Tour de Limousin.

Aitor Osa, born in Zestoa, Euskadi in this day in 1973, came ninth overall in the 2001 Vuelta a Espana, won the Vuelta's King of the Mountains and the Tour of the Basque Country in 2002 and came second at La Flèche Wallonne in 2003. He would later be implicated in the Operacion Puerto doping scandal when he was suspected of being "8," the owner of bags containing preserved blood found in Eufemiano Fuente's laboratory. Aitor's younger brother Unai was believed to be "7," owner of more bags.

Markus Fothen, born in Kaarst, West Germany on this day in 1981, won the Under-23 World Time Trial Championship in 2003. In 2005, only his second year as a professional, he was 12th overall at the Giro d'Italia; the year after that 15th over at the Tour de France and in 2008 he won Stage 5 and was eighth overall at the Tour de Suisse. Fothen rode for Gerolsteiner for five years until 2009, then switched to Milram for two years. In 2011 he moved down to Continental-clas racing with NSP-Ghost and stayed with them through 2012 and 2013.