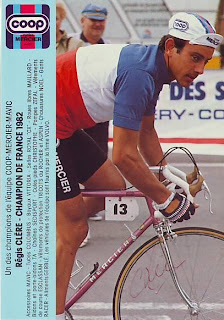 Régis Clère
Régis Clère, who was born in Langres, France on this day in 1956, got his first professional contract with Miko-Mercier-Vivagel in 1981 after winning two stages at the Tour de l'Avenir in the previous years; that very same season, he became National Champion in Pursuit and the Points race, won the Prologue and Stage 15 at the Vuelta a Espana and came 51st at the Tour de France - during which he managed to get himself onto the podium after coming third on Stage 1b. He had been born into a family of peasant farmers and, like so many cyclists before and since, his determination when racing stemmed from a determination to make a better life for himself than his ancestors had known - and he soon picked up a reputation for being an aggressive, combative rider who forced himself to keep riding hard when others had gone into survival mode.

In 1982, Clère won the National Road Race Championship; then he went back to the Tour and came fifth in the Prologue and top ten on two stages, finishing up in 45th place overall, and the year after that he won Stage 11 before abandoning a few days later. In 1987 he won Stages 16 and 23, and in 1989 he won the bronze medal in the World Pursuit Championship race, but was forced to retire after a car in which he was traveling crashed, leaving him with facial injuries and two smashed femurs. In retirement, he returned to run the farm from which cycling had offered an escape and remained there for the rest of his life, sometimes racing for a local amateur team. Clère died of heart failure while undergoing an operation in Dijon on the 9th of June 2012.

Yoshiuki Abe, born in Osaka in this day in 1969, turned professional with the Italian Panaria-Vinavil team in 1996, then went with team manager Maurizio Piovani when he switched to Mapei in 1997 - the year he became the only Japanese rider to win the Japan Cup (he still is) and also took the gold medal at the National Road Race Championships. He won the National Time Trial Championship two years later, the the National Road Race for a second time. In 2003 he joined the Japanese Shimano Racing team and won the Tour of China. The Shimano team became based in the Netherlands in 2005 after securing a co-sponsor, Memory Corps; Abe remained with them until 2008, by which time the organisation had become Skil-Shimano, then returned to Japanese racing with Matrix-Powertag in 2011.

Giampaolo Caruso, who was born in Avola, Italy on this day in 1980, was European Under-23 Road Race Champion and took the silver medal at the U-23 Worlds in 2001. In 2004 he completed the Vuelta a Espana, then in 2005 went to the Giro d'Italia and came nineteenth - and then twelfth in 2006, his best ever Grand Tour result. He was one of the many riders implicated during Operacion Puerto but the investigation into him was dropped by the Spanish Federation; the Italian Olympic Committee was unsatisfied with this result and went to the Court of Arbitration in Sport seeking a two-year suspension, but he was again cleared. Caruso rode his first Tour de France with Katusha in 2012, and came 37th. 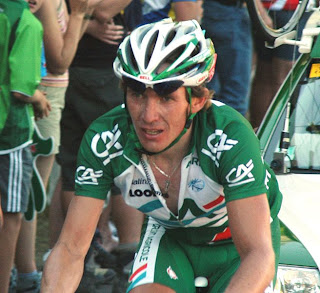 Dimitri Fofonov, born in Almaty, then USSR on this day in 1976, won a series of Kazakh national track titles around the turn of the century and performed sufficiently well on the road to earn a contract with Cofidis in 2001. He rode the Vuelta a Espana with them that year but didn't finish, then came ninth on Stage 13 in 2002 and rode the Giro d'Italia and the Tour de France in subsequent years, managing nineteenth overall at the Tour in 2008. After the Tour, it was announced that a ample he provided shortly after Stage 18 had tested positive for vasodilator heptaminol, a drug that had been removed from WADA's banned list in 2004 but then reinstated two years later; he was sacked by Crédit Agricole on the 27th of July. Fofonov joined Astana when his two-year ban expired and remains with them to this day - he returned to the Vuelta that year and came 57th, then finished the World Championship road race in twelfth place; in 2011 he ride the Tour and was sixth on Stage 17, coming 106th overall, then he came tenth of Stage 10 and 63rd overall in 2012.