Since 2007, Kanis has concentrated on the track, winning nine gold medals (including the 500m, Keirin and Sprint for a second time in 2008), silver and bronze at the Worlds in 2009, a third 500m National Championship in 2010 and a fourth 500m and third Keirin title at the Nationals in 2011. In 2010 she joined AA Drink-Leontien.nl, one of the strongest teams ever seen in women's cycling, but one that would come to an end in 2012 when owner Leontien van Moorsel announced that she would be retiring from team management

Colin Lewis
Born in Torquay, Great Britain on this day in 1942, Colin Lewis began racing in his late teens and finished his first big race - the 1960 Milk Race (now the Tour of Britain) - in seventh place. Good results in French races earned him a place in the traditional home of all promising riders from nations other than those that traditionally do well in cycling, the AC Boulogne-Billancourt, and in 1964 he was the best-placed British rider at the Olympics. 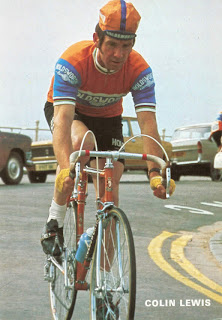 In 2010, riding for Astana, he won the Points competition at the Tour of Poland and later took a gold medal at the Commonwealth Games. 2011, during which he remained with Astana, proved to be a quieter year without victories; nevertheless his results remained good enough to win him a place with the new Australian GreenEDGE team for 2012 and he won the Jayco Bay Classic for them. He is still riding for the team, now known as Orica-AIS, in 2013.

Sep Vanmarcke, born in Kortrijk, Belgium on this day in 1988, came second at Gent-Wevelgem in 2010, fourth at the E3 Prijs Vlaanderen-Harelbeke in 2011 and first at the Omloop het Nieuwsblad in 2012. In 2013, riding for the new Belkin team and having taken fifth place at the National Road Race Championship, he was entered for the Tour de France.