During the Second World War, La Flèche Wallonne was held on a later date each year than has traditionally been the case. This date, the anniversary of the sixth edition in 1942, is the latest in the race's history. It was 208km long - shorter than before and after the War, but comparable to modern editions - and ran between Mons and Marcinelle. It was the last major victory for Karel Thijs, whose professional career came to an end shortly afterwards.

Percy Stallard
Born above his father's Wolverhampton bike shop on this day in 1909, Percy Thornley Stallard became the man responsible to the reintroduction of mass-start cycling road races in Great Britain.

The ban on road races had come about as the result of an incident in 1890 when a group of cyclists spooked a horse, resulting in an overturned carriage and a complaint to the police; this convinced the National Cyclists' Union that any further complaint would be likely to result in all bikes being banned from the nation's roads and they introduced a rule stating that mass-start races could only be held at velodromes or on sites such as airfields. Individual time trials, in which each cyclist rides alone against the clock, were not banned as the general public are unlikely to realise that a race is even in progress when they see one cyclist and it was easy to hold them in secret; this is the reason that time trials remain more popular in Britain than elsewhere even today and why many cycling clubs like to refer to time trial routes using codes rather than place names - it's also the reason that, until comparatively recently, British cyclists tended to do so badly when they went abroad to compete in road races.

In 1936, the Isle of Man held a cycling race on the world famous Tourist Trophy circuit (the Isle has its own government and issues its own passports - NCU laws didn't apply there) and it proved to be a huge success despite the high number of crashes among British cyclists unused to racing in a peloton, rapidly developing into the prestigious Manx International. Stallard took part in the race and finished in 16th place; inspired by it he decided to investigate the possibility of launching a similar event on the British mainland and saw his chance in 1941 when the Second World War caused petrol shortages and traffic levels dropped accordingly, so he wrote to the NCU with his suggestions.

NCU official A.P. Chamberlin was not favourable, writing back to explain the reasons behind the ban and stating that the organisation wouldn't even consider changing its policy. However, now that airfields were being used by the Army and Royal Air Force races were few and far between, so Stallard put the word around that there would be an unofficial meeting at the bottom of Shropshire's Long Mynd, a range of hills that has long been popular among cyclists. It was there that he revealed his plan to hold a 95km on the 7th of July that year from Llangollen in North Wales to Wolverhampton, without the support of the NCU but with the backing of the police - he'd spoken to them to get an idea of how they might react and, rather than threatening a ban, they'd been extremely favourable and offered their help.

The NCU, meanwhile, were furious and set about doing all they could to prevent the race from going ahead, but Stallard would not back down and the race went ahead. A thousand people turned out to see the riders cross the finish line and the event a success by the organisers and the police. Now, the NCU's anger passed beying fury -  Stallard and fifteen others involved in organising the race were handed a sine die ban: one without a specific date upon which it would end but which could be lifted at any time if the subject either successfully appealed or, as the organisation presumably hoped would be the case in this instance, apologised and did as he or she was told. Yet still Stallard would not back down, especially now that he had proved mass-start races could be held on British roads, so in November he helped launch the British League of Racing Cyclists - an organisation of like-minded riders that act as an umbrella body co-ordinating a number of pre-existing groups and would go head-to-head with the cycling establishment. 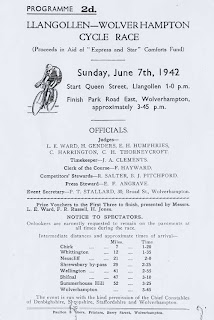 Encouraged by their success, the BLRC went on to organise Britain's first multi-stage road race which began in 1944 (Stallard won Stage 1, Les Plume won overall); this led in turn to the five-stage Victory Race between Brighton and Glasgow in 1945, organised to celebrate the end of the war - Robert Batot, a Frenchman, won (the race was not recognised by the UCI; Batot and the other five French riders to finish in the top ten came from the BLRC's French counterpart rebel organisation the Fédération Sportive et Gymnastique du Travail - an association of Communist riders - with whom organisers were put in touch by the French owners of a cafe in London's Soho). In 1946, the Victory (now known as Brighton-Glasgow) was held again, then in 1947 it received financial backing from the News of the World newspaper. Their sponsorship ended after that one event but the race took place again in 1948 and 1949, largely paid for by the organisers as had been the case with the first two editions; then in 1950 it was sponsored by the Sporting Record and in 1951 by the Daily Express (which used to be a great newspaper, rather than the rag it is today) - this edition was the first to be named the Tour of Britain (it was joined by an amateur race sponsored the Butlins firm, known as the Butlin Tour, with each stage running between Butlin's holiday camps). The Express remained on board for three years until the constant infighting between organisers and route officials saw them pull out and begin sponsoring motor racing instead, at which point Quaker Oats took over and continued sponsorship for four years. In 1958, by which time the race had become hugely successful, the Milk Marketing Board became sponsor: it was renamed the Milk Race. The final Milk Race was held in 1993, but would be reborn as the PruTour (sponsored by Prudential Insurance) in 1998 and 1999, then vanished once again. In 2004, British Cycling - whom Stallard had despised so much - teamed up with sports and events marketing firm SweetSpot to bring the race back to life. Once again known as the Tour of Britain, it grew to become the largest cycling event in the country and has become an important part of the UCI's EuropeTour racing series.

Stallard was not fundamentally opposed to the NCU itself, but to the entrenched attitudes and beliefs it held - it didn't take long before he started to feel the same way about the BLRC, and he was briefly banned after criticising it. In time, the NCU and BLRC merged to form the British Cycling Federation, which Stallard saw as treason - when one of his employees, Ralph Jones (who had finished in sixth at the Llangollen-Wolverhampton race) went to Spain as part of the group visiting a UCI meeting that led to the BCF becoming recognised as Britain's cycling governing body, he sacked him the day he got back.


Mauro Ribeiro, born in Curitiba, Brazil on this day in 1964, won Stage 9 at the Tour de France in 1991. He was the first Brazilian stage winner in Tour history.