The famous Liège-Bastogne-Liège Classic, the oldest of the Monuments that make up the five most important cycle races after the Grand Tours, fell on this day in 1911 - the sixth edition, as the race skipped 1894-1908 and 1910. The winner was Joseph Vandaele (right), also spelled Van Daele, who would have been the second Frenchman to win the race as he was born in Wattrelos but had taken Belgian nationality prior to 1911.

The Vuelta a Espana began on this day in 1941. At 4,442km it was the longest edition ever (the exact distance is unclear, and some sources say 4,409km - either makes it the longest; though it fell far short of the longest ever Grand Tour, the 1926 Tour de France which was an incredible 5,745km). It also had the lowest ever number of starters, 32, partially as a result of the distance but primarily because this was the first edition since the Spanish Civil War and the country was still piecing itself back together. Julián Berrendero won overall (and again the next year) with a time of 168h45'26", while Delio Rodríguez (+29'17") won twelve stages but was fourth overall. His total of 39 stage wins in the five editions he entered remains the record today.


Félicia Ballanger
Born in La Roche-sur-Yon, Félicia Ballanger was born on this day in 1971 and named after her mother's favourite cyclist Felice Gimondi (her brother, Frédéric, was named after Federico Bahamontes). It seems likely, then, that her mother may have hoped to raise two successful cyclists of her own; and thanks to Félicia she got her wish.

Whilst still a child, Félicia joined the Vendée la Roche Cycliste and was immediately recognised as a serious track talent; the specialised training she received enabling her to win the Junior World Sprint Champion title in 1988. A year later she won the Sprint silver medal racing in the Elite category at the National Championships, then did so again in 1990; coming second on both occasions to Isabelle Gautheron who, seven years her senior, was by far the more experienced rider. She won the title in 1991 and 1992, then came second again in 1993 and might have won gold at the World Chmpionships had she not have been left with a broken collarbone and  a shard of broken wood embedded in her thigh following a crash. The next year, she won back the National Sprint title; then in 1994 she won it again and added the National 500m Championship and two gold medals for the same events at the Worlds. She won all four events again in 1996, then won another gold in the Sprint at the Olympics.

Ballanger retained her two National and two World titles all the way to 2000, then relinquished the World titles (she won the National ones for another year) so she could concentrate on the Olympics again - and this time, she won gold for the 500m and the Sprint. One of the most successful track cyclists of all time, she finally ended her reign when she retired in 2001 and took up the post of vice-president of the Fédération Française de Cyclisme. Today, she lives on the island of Nouméa in the French South Pacific territory of New Caledonia. She is married, had two children and works for the Ministry of Youth and Sport where she is responsible for anti-doping programs.

Steve Bauer
Steve Bauer, who was born St. Catherines, Ontario on this day in 1959, joined the National Team in 1977 and originally specialised in team pursuit events. It wasn't long before he turned out to also be a very talented road racer, winning the National Championship in 1981, 1982 and 1983 and, after winning the United Texas Tour and coming third in the World Road Race Championships in 1984, he began to specialise in the discipline.

In 1985, he joined Bernard Hinault's La Vie Claire team and was entered for his first Tour de France. He took an impressive sixth place in the Prologue, then eighth in Stage 8, seventh in Stage 21 and fifth in Stage 22, which earned his third place in the overall Youth category and tenth in the General Classification - a very good finish indeed for a Tour debutante. This was the first of eleven Tours; his best overall result would be in 1988 when he was fourth in the General Classification behind Pedro Delgado, Steven Rooks and Fabio Parra. That edition also brought his only solo win ( La Vie Claire won the Stage 3 team time trial in 1985) - Stage 1, and after it he led the race for five days and was only the second Canadian to have ever worn the maillot jaune.

Bauer is remembered as one of the unluckiest riders in the history of professional cycling and his palmares would almost certainly shine far brighter had he not have been condemned so many times to runner-up places by punctures, mechanicals and crashes. In 1988, he was at the centre of a controversy involving Claude Criquielion. The two riders had collided during the final sprint at the World Championships; Bauer was able to remain upright but disqualified, while Maurizio Fondriest took advantage of the situation and won. Criquielion, who had been hoping to win back his 1984 title, refused to believe that it had been just another example of the sort of accident that happens in a sprint - indeed, it's far from certain from video footage if it was in fact an accident - and attempted to sue to sue the Canadian for assault, asking for an amount equal to £1.5 million. The case dragged on for three years before a court eventually found in favour of Bauer. In 1990, the finishing order at Paris-Roubaix was so close that judges examined photographs for more than ten minutes before deciding that Bauer had lost to Eddy Planckaert by 1cm, the closest finish in the history of the race.

In 1994, Bauer was awarded the Meritorious Service Medal in recognition of his work in paving the way for future Canadian cyclists to compete at the top level of the sport, and there's a very good case to be made in support of Ryder Hesjedal dedicating the Tour de France victory that he'll probably win sooner or later to him. Having retired after the 1996 Olympics, Bauer formed Team R.A.C.E Pro, which would become Spidertech-C10. He remains the owner and a directeur sportif.

Italian cyclist Andrea Guardini, who born in Tregnago on this day in 1989, holds the record for most stages won at the Tour de Langkawi with twelve from three editions, 2011 (five), 2012 (six) and 2013 (1). In 2011 he also won Stage 5 at the Tour of Qatar, Stages 1 and 7 at the Tour of Turkey and Stage 5 at the Volta a Portugal. Many consider him destined for great things, perhaps even a Grand Tour victory, pointing to his Stage 18 victory at the Giro d'Italia in 2012 and fourth place at Scheldeprijs is 2013 as evidence.


Philippe Bouvatier, who was born in Rouen on this day in 1964, became French Junior Road Race Champion in 1982 and joined Renault-Elf in 1984, then took thrid place at the Tour de l'Avenir. In 1986, by which time he was with Zor-B.H. Sport, he rode in the Tour de France - like the majority of Tour debutantes, he didn't finish; but 31st place on Stage 6 over 200km from Villers-sur-Mer to Cherbourg was respectable enough. In 1987 he did better, finishing the race and coming twelfth on Stage 24, a 38km individual time trial. He finished again in 1988 and improved his overall placing to 32nd; then rode his final Tour in 1990 for RMO, abandoning the race after Stage 6 when he came 190th, one place above Lanterne Rouge Thierry Claveyrolat. After three more years riding criteriums and smaller stage races, he retired in 1995 after failing to win anything that year.

Colby Pearce, born in Boulder, Colorado on this day in 1972, won the US Madison Championship in 2000 and held it until 2003 when he came second. In the intervening time, he also rode for the gold-winning Pursuit team. In 2003 he was National Scratch Champion, the once again rode with the victorious Team Pursuit squad in 2004 and a year later won back the Madison title. He retired from competition in 2005 to take up a position as coach to the National Track Team, but resigned and returned to racing in 2007. He won the Madison title for the last time in 2007 and 2008 (with another Team Pursuit gold in both years).

Charles King, an English cyclist born on this day in 1911, won a bronze medal in front of Hitler when he and the British team finished the Team Pursuit in third place at the 1936 Olympics in Berlin. He died on the 19th of July, 2001. 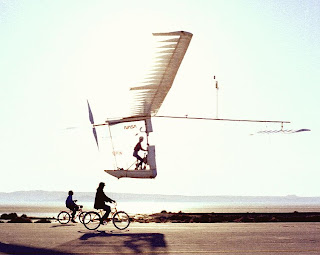 On this day in 1979, amateur cyclist Bryan Allen both powered and piloted the Gossamer Albatross - a human-powered aeroplane - over the English Channel. Designed and built by Dr. Paul B. MacCready, the Albatross consisted of a mylar skin stretched over a carbon fibre and polystyrene skeleton, unladen it weight 32kg. Inside was a modified bike frame, by pedaling the pilot drove a two-bladed propellor. MacCready died on the 28th of August 2007; Allen is now a software engineer at the Pasadena Jet Propulsion Laboratory.