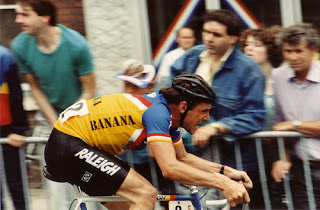 Better known today as a cycling commentator, William Paul Sherwen was born in Widnes, UK on this day in 1956 and brought up in Kenya. As a boy, he earned a reputation as a swimmer and didn't take to cycling until he was 16 and back in Britain, where he joined the Weaver Valley CC and was noticed by the legendary coach Harold Nelson - a man who, having started training cyclists in 1953, remains famous to this day for his ability to transform young talent into world-beating potential in an uncommonly short period of time. Sherwen's experiences with Nelson were no different and, aged 19, he won the Archer Pernod GP, the Manx International, two stages of the Tour of Malago and, as a result, the prestigious season-long Star Trophy. One year later he entered Folkestone-London, older and more experienced riders not expecting him to get far after he attacked the moment the race got under way. However, he did not tire; and when other riders responded he attacked again. Then, when the effort began to take its toll on his legs, he knew that his opponents would also be tired so he attacked some more. He won.

Just like so many British riders before and since, once he'd established himself as a potential great his next step was membership of the Athletic Club Boulogne Billancourt in Paris, the world's most famous amateur athletic club and one that has a long history of turning good riders into the very best. For some, there is an obvious similarity between Sherwen and the Angel of the Mountains Charly Gaul - not in looks, but in a shared ability to suffer far more than the average man without breaking. Sherwen showed signs of that ability when he came third in the 1977 Paris-Roubaix Cyclo, the amateur version of the hardest race of them all and which takes place on the same parcours, with the same cobbles designed for the iron-clad wheels of Napoleonic cannon and mining carts rather than for the spindly wheels of bicycles. His other results that same year were sufficient to win him second place in  the Palme d'Or, another season-long competition, even though he'd spent a big chunk of the year in England sitting his exams.

In 1978, he was offered his first professional contract to ride with Fiat under Raphaël Géminiani and entered the Tour de France for the first time. For a rider to even finish his first Tour deserves respect, that Sherwen came 70th overall demanded a lot of respect, especially in view of the stupendously high pace set by Bernard Hinault (Hinault was also making his Tour debut, and he won - but Hinault was not like mortal men). The next year, when Hinault won again, Sherwen was 81st overall, but finished in the top ten on four stages and in the top twenty on four others. In 1979, now riding for La Redoute-Motobécane, he had a bad crash during Stage 3 and reached the finish time after the maximum time had elapsed; however, in recognition of the sheer effort he had put into finishing, officials decided to waive the rule and he was permitted to start again the following day.

1979 proved good practice for what happened five years later when he crashed in the first kilometre of Stage 10 - officially a hilly stage, but arguably deserving of mountainous classification. Then, he tried desperately to catch up, riding solo for more than six hours over six tough climbs, but could not; reaching the finish line more than an hour behind stage winner Jørgen Vagn Pedersen and a full 23 minutes beyond the maximum time. Once again, judges took note of his heroism and allowed him to race the next day. It was his last Tour.

Sherwen became National Road Race Champion in 1987, then retired. He has since returned to Africa and lives in Uganda, but retains an avid interest in cycling and is considered an authority on the subject. Alongside Phil Liggett, he provides cycling commentary for broadcasters the ITV in Britain, NBC and CBS Sports in the USA, SBS in Australia. He may never have won a stage at the Tour, but for fans on those three continents he is its voice.

Matt Brammeier
Matthew Martin Brammeier was born in Liverpool on this day in 1985 but, as he has Irish and Welsh heritage, has represented both nations and Great Britain in competition. He was selected to take part in the World Track Championships in 2003 after taking a bronze medal for Pursuit at the Junior Nationals and then won a gold in the National Junior Road Race Championship, then added good results over the next two years (including a gold medal at the Under-23 UIV Cup in Dortmund, won with Mark Cavendish).

By 2006, he'd already made enough of a name for himself to get picked up by the UCI Continental class Driving Force Logistics-Cycling News-Litespeed team and was selected for the Welsh squad at that year's Commonwealth Games but failed to win a race that year, his best result being third place for a stage at the Tour of Siam. 2007 brought victory at the Under-23 National Individual Time Trial Championship, but then took a downturn in November when he was hit my a cement lorry during a training ride and left with two broken legs - an injury that had the potential to end his career just as it was really beginning to take off. Fortunately, his new Profel team was willing to keep him on the books while he recovered; in 2008 he returned to competition and won the Boom criterium in Belgium.

In 2009, Brammeier declared Irish nationality in order to be able to represent Ireland, also gaining a contract to ride with the well-respected An Post team run by Sean Kelly, and in 2010 he became Irish Road Race Champion after beating Nicolas Roche, who rode for the ProTeam AG2R-La Mondiale. The next year, Brammeier won the National Champion title for the road race and the individual time trial after he too would moved up to cycling's highest competitive level when he was taken on by the enormously successful HTC-Highroad, where he once again rode with Mark Cavendish. Highroad, despite being the first team to introduce anti-doping measures in addition to those required by the UCI and WADA, came to a sad end that year when sponsors told owner Bob Stapleton that they were pulling out due to the public's perceived association between professional cycling and drugs, leaving Brammeier and others looking for a new team. He was one of those who had little trouble in finding a new home, and went to the Belgian outfit Omega Pharma-QuickStep.

Brammeier has been romantically involved for some time with Nikki Harris, the Derbyshire-born track cyclist, mountain biker and cyclo cross rider who has held numerous National titles was once decribed by Transport for London as Britain's most promising young cyclist.

Yasutaka Tashiro, born in Tokyo on this day in 1974, won the Japanese National Road Race Championships in 2001 and 2004. He also got promising results in Asia and Europe, but only raced for six seasons until 2006. He now works for Bridgestone, the car parts manufacturer that sponsored the team with which he spent his entire cycling career.

Volodymyr (also spelled Vladimir) Pulnikov, who was born in Kiev on this day in 1965, scored his first notable result at the 1985 Tour of Britain, in those days known as the Milk Race. In 1989, he was the best Young Rider at the Giro d'Italia and in 1990 he won Stage 9, the overall Points competition and was fourth in the General Classification. In 1991 he won Stage 6 at the Giro and entered the Tour de France for the first time, managing seventh place for Stage 19 but only 88th overall. Two years later he finished Stages 1a and 14 in third place and was seventh overall at the Giro, then third for Stage 12 and 10th overall at the Tour. In 1994 he won Stage 20 at the Giro and came very close to winning the Tour de Suisse (but was ultimately beaten by Pascale Richard) before returning to the Tour for another 10th place overall. After that, his powers began to fade and, following 25th place in the 1995 Tour's General Classification he went for a year without any significant results. Third place in the 1997 Giro di Toscana was his last, and he retired in 1998.

Guido Fulst, a German cyclist born on this day in 1970, won the Tour du Loir-Et-Cher 'Edmond Provost' in 1989 and numerous National, World and Olympic titles on the track between 1987 and his retirement in 2008.

Percy Wyld, who was born on this day in 1907, was the younger sibling of Harry and Lewis Wyld, three brothers who rode alongside Frank Southall in the British Team Pursuit squad at the 1928 Olympics in Amsterdam.