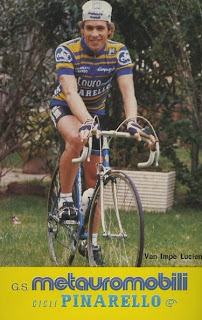 At the Tour de l'Avenir in 1968, The Eagle of Toledo - also known as Federico Bahamontes, who in the opinion of many fans was the greatest climber cycling has ever produced - watched a young Belgian rider who was doing rather well on the mountain stages; sufficiently well that he won the King of the Mountains overall. The rider's name was Lucien van Impe, and he'd been born almost 22 years earlier in Mere. The Eagle was so impressed by his performance that he spoke to Jean Stablinski, another rider of considerable repute who had since become general manager of the Sonolor-Lejeune team, and the next season van Impe had his first professional contract with them.

Van Impe entered the Tour de France fifteen times in total and completed each of them - only Zoetemelk and Viatcheslav Ekimov have completed more. He has been at the centre of a number of interesting incidents, both as a rider and since his retirement. The first - and the one that everyone knows - came at the Tour in 1976, by which time Solonor had become Gitanes-Campagnolo and was managed by Cyrille Guimard: the story goes that Guimard repeatedly told van Impe to attack Joop Zoetemelk and became so frustrated at his refusal to do so that he eventually threatened to order the driver of the team car to run him over if he didn't. Guimard, notoriously hot-tempered at times (and more than successful enough as a rider and manager to be well used to getting what he wants), claims that this is what won van Impe the Tour that year, while Van Impe denies that it ever happened. Another comes from a year later, when van Impe was the easy favourite to win the King of the Mountains, which he did eventually win - but only after losing the lead on the Alpe d'Huez when he somehow forgot to eat, rapidly running out of energy on his way up the mountain. The house in which he lives, in Impe, is named Alpe d'Huez.

In 2004, Richard Virenque beat Bahamontes with a record seventh King of the Mountains. Although he had been implicated in the Festina Affair and was proved a liar, Virenque remained enormously popular among the French fans who, nearly two decades since Bernard Hinault had been the last, were desperate for a French rider to win the Tour. However, van Impe - who, incidentally, never missed nor refused an anti-doping test and passed every one to which he was subjected - said that in his opinion Virenque was an opportunist rather than a great climber. Bahamontes agreed in part, saying that it was a pity Virenque would now be considered the greatest climber because he was not a "complete" rider; then added that he did not consider himself to be the greatest, either - he believed that Charly Gaul and van Impe were both better than he had been.

Patrik Sinkewitz
Born in Fulda, Germany on this day in 1980, Patrik Sinkewitz won numerous races during his early career and rode his first Grand Tour, the Vuelta a Espana, with QuickStep-Davitamon in 2003, coming 73rd overall. He stayed with the team until the end of 2005, riding the Vuelta again (and failing to finish) in 2004, then rode his first Tour de France in 2005 and came 59th overall.

Having switched to T-Mobile for 2006, he returned to the Tour and was 23rd; inspiring fans to wonder if he might be a future winner. In 2007 he crashed into a spectator during Stage 8 and, while seeming unhurt initially, did not start Stage 9 following the first rest day. Then, a day later, it was announced that a sample he provided had been found to contain a suspiciously high level of testosterone and he was suspended. When he declined his right to have his B sample tested T-Mobile sacked him, the decision being announced on the last day of July - in November, he admitted that he had also doped with blood transfusions and EPO; since this was his first offence, he was banned for one year.

In 2009, Sinkewitz returned to competition with the ProContinental PSK Whirlpool-Author team. Victory at the Sachsen Tour and a stage win at the Volta a Portugal brought a better offer from ISD-Neri, whom he joined for 2010; that year he was sixth overall at the Tour of Britain. Early in 2011 the UCI revealed that he had failed another test, providing a sample at the GP di Lugano in February that had turned out to be positive for human growth hormone. This time, he requested that his B sample be tested, but it too was positive - he thus became the first rider to be suspended for using HGH but insisted that he was innocent of the charge. An investigation conducted by the German cycling union subsequently found evidence that cast serious doubts on WADA's guidelines on HGH testing and cleared him of wrong-doing in June 2012. A few months later he took seventh place at the Tour du Gévaudan in France.


Yves Hézard, born in Donzy, France on this day in 1948, was National Military Road Race Champion in 1969, won Stage 7 and came seventh overall at the Tour de France in 1972 and became National Pursuit Champion in 1977.

Pierfranco Vianelli, who was born in Provaglio d'Iseo, Italy on this day in 1948, won the Individual Road Race at the 1968 Olympics.

August Meuleman, born in Soumagne, Belgium, raced between 1928 and  and 1950 but was professional for just two years, riding for Depas Cycles in 1932 and 1933. In 1929 he came second in the Independents Ronde van Vlaanderen and in 1937, 1938 and 1948 he was National Stayers Champion, but other than a few criterium victories he endured long stretches without winning.

André Pousse, born on this day in 1919, was a French actor who starred in a number of successful films including Un Flic, Drôles de zèbres and Les Égouts du paradis. Usually, he played a gangster. As a young man, he was also a notable cyclist, winner of a record eight editions of the Six Days of Vél d'Hiv event at Jacques Goddet's Vélodrome d'hiver - the record will remain unbroken as the Vél d'Hiv was demolished following a fire in 1959.