On this day in 1961 a race took place at Petit-Enghien, not far from Hainaut in the Walloon region of Belgium. It wasn't an important race and very few people were there to see the unknown 16-year-old who took his very first victory that day. His name was Edouard Louis Joseph Merckx. 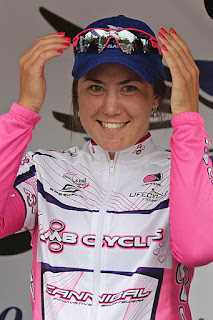 Born in Bendigo, Australia on this day in 1990, Chloe Hosking won a silver medal and two bronze at the Oceania Games in 2006, then two bronze at the Nationals and two golds and two silvers at the Oceania Championships the following year and a gold and bronze at the Nationals in 2008. After such an illustrious junior track career, she signed up to the Dutch-based Moving Ladies team for 2009 and began concentrating on road racing in 2009 and came third at the Bay Classic and won a criterium in Wellington and two stages plus the General Classification at the Tour of Chongming Island. In 2010 she joined HTC-Colombia, where she would stay until the team dissolved at the end of 2011; during that time she won the National Under-23 Criterium Championship, another stage at Chongming Island and was fourth at the Holland Ladies' Tour. She then went to Specialized-Lululemon for 2012 and beat the then World Champion Giorgia Bronzini and Marianne Vos to first place at the Drentse 8 van Dwingeloo, winning Stage 5 at the Route de France Féminine later in the season.

Following the 2011 World Championships, several female riders attacked the UCI over conditions in women's cycling, especially highlighting the fact that whereas the male riders in the ProTour receive a guaranteed minimum wage, some of their female counterparts are paid no salary at all. Hosking added her voice to the argument following the Bay Classic - when asked for her thoughts on UCI president Pat McQuaid's statement in which he claimed women's cycling is insufficiently developed for the riders to deserve pay equality, she replied: "What can you say, Pat McQuaid is a dick."

McQuaid, predictably, was less than impressed and moves to punish her got underway. Fans, however, supported the rider - many used Twitter to point out that McQuaid held no power of them and that they too thought he was a dick. Cycling Australia, as the nation's official UCI-affiliated cycling body, had no choice but to act, but announced that it would seek an explanation before deciding on a punishment; it also emphasised the fact that all its members "have the right to express views contrary to those of the UCI." Hosking then replied: "I have to apologise for how I phrased my comments, I wasn't that eloquent. Women's cycling every year is getting stronger and stronger. It needs to get more recognition and I'm not going to apologise for what I said, but I do apologise for how I said it" - and Cycling Australia, accepting her official apology, levied a fine of just $200, suspended for a year (so she won't have to pay it unless she does something similar in that period), and hinted very heavily that it shares the opinion that more should be done for the sport.


Adam Blythe, born in Sheffield, Great Britain on this day in 1989, comes from a cycling family and was encouraged to begin competing during childhood, as was his sister Kimberley who has also enjoyed some success. Blythe qualified for British Cycling's Olympic Development Program and won a number of Junior National titles on the track, but decided his future lay with the commercial trade teams and left in 2009 with a Cycling Time Trials scholarship allowing him to relocate to Belgium in an attempt to further his career; he joined Silence-Lotto as a trainee and won a stage at the Thüringen-Rundfahrt that year, then picked up sufficiently promising results to win a two-year full-professional contract with the team. In 2012 he has been riding for BMC.

Neil Stephens, born in Canberra on this day in 1963, is the only Australian rider to have completed all three Grand Tours in a single year. He was National Road Race Champion in 1991 and 1994. Stephens joined Festina-Lotus in 1997 and was one of the riders implicated in the Festina Affair of 1998, but claimed that he had never willingly doped and had taken only what he believed to have been vitamin supplements administered by the team doctor. He retired a short while after the team left the Tour de France.

Attilio Pavesi, born in Caorso, Italy on this day in 1910, won gold medals for the Individual and Team road races at the 1932 Olympics. He later relocated to Argentina to become a race organiser and died in Buenos Aires on the 2nd of August in 2011 - at almost 101, he was the oldest Olympic Champion and was believed to be possibly the oldest person to have competed in the Games.