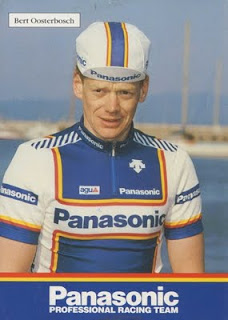 Born in Eindhoven on this day in 1957, Bert Oosterbosch showed enormous potential as an amateur and won seven major races in 1978, the year before he turned professional with Peter Post's legendary Ti-Raleigh, then in his first season with the team he won six victories and became World Pursuit Champion.

Oosterbosch did well on the track throughout his career with three National and one World Champion titles, but he would become known primarily as a road time trial specialist. Yet he could also perform well enough on mass-start stages to place well in General Classifications, as was the case in 1980 when he won the Tour de Luxembourg and Stage 8 at the Tour de France. He would also win Stages 6 (time trial) and 8 (222km mass-start) at the Tour in 1983, and in 1985 he won the Prologue at the Vuelta a Espana.

All in all, Oosterbosch achieved around 91 professional victories, mostly for Ti-Raleigh or Panasonic, the team Post set up after Raleigh withdrew from racing. He would almost certainly have won many more had he not have been plagued by bad health - he had meningitis twice, and his career was brought to a premature end in 1988 when he developed severe knee problems. In 1989 his knees had recovered sufficiently that he came out of retirement, winning his first post-return race on the 13th of August. Five days later, aged just 32, he died of a massive heart attack, leaving behind his wife and two young daughters.

As is invariably the case when any young athlete dies, suspicions soon arose that Oosterbosch's death was caused by doping, specifically EPO which has been linked to numerous similar cases - if so, he would be one of the first victims of the drug. Willy Voet, the Belgian soigneur who was arrested with a car full of drugs and thus sparked off the notorious Festina Affair of 1998, claims in his book Breaking the Chain that Oosterbosch used Synacthen (tetracosactide), a drug that stimulates the adrenal glands and thus raises cortisol blood levels, at the GP des Nations in 1982. However, his statement that the rider came 18th because "the drugs initially blocked his ability to work hard" when he in fact came third may be an indication that Voet's memory is unreliable (perhaps as a result of his taste for the odd injection of Belgian Mix - a concoction of cocaine, heroin, morphine, amphetamine, caffeine and, apparently, anything else that happened to be around) or that - as many people believe - he is a liar; and it is equally possible that Oosterbosch's death was caused by a pre-existing heart defect, undiagnosed by the methods available at that time.


Ben Greenwood, born in Nether Kellet, Lancashire on this day in 1984, was British Under-23 Road Race and Time Trial Champion in 2005.

Julio Alberto Pérez, born in Tlaxcala on this day in 1977, won the Giro del Trentino in 2005 and remains the only Mexican to have ever won the race. In 2002, he won Stages 13 and 16 and the overall King of the Mountains at the Giro d'Italia. 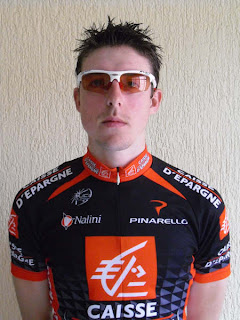 Ángel Madrazo Ruiz, born in Santander, Cantabria on this day in 1988, had won just enough races to be signed up by Movistar in 2011. That year, fans at the Tour Down Under made him the subject of their very fine tradition of picking the humblest non-English speaking domestique in the race and treating him like the greatest cyclist that ever lived, turning up at hotels in vast numbers, painting his name in vast letters on the roads and cheering him at every opportunity. He paid them back in 2012 with a superb performance for fourteenth place overall and later came fifth at the Tour Méditerranéen and fourth at the GP Miguel Indurain.

Mike Fraysse, born in the USA on this day in 1943, was president of US Cycling from 1979 to 1981 and again from 1994 to 1998, having sat on the Federation's board of directors from 1969 to 1994. As a result, he was involved in the coaching and development of some of the finest riders his nation has ever produced, among them Greg Lemond, Connie Carpenter, Rebecca Twigg, Andy Hampsten and Lance Armstrong. He also holds life membership of the Polish Federation, which awarded him its Medal of Distinction in recognition of his work with and support for the legendary coach Eddie Borysewicz. Fraysse designed and built the bike ridden to second place by Greg Lemond at the 1979 Junior Worlds, believed to be the first frame to use aerodynamic teardrop-shaped tubing, and now owns and runs a private training facility.