Tour de France 1939
18 stages (Stages 2,  6, 8, 12, 17 and 18 split into parts A and B, Stages 10 and 16 split into parts A, B and C), 4,224km.
There were three big differences in 1939 compared to earlier races - one with the race, one with the parcours and one with the riders themselves. The difference in the race was that a mountain time trial had been added for the first time: in Stage 16, riders faced a very tough 64km route between Bonneval and Bourg-Saint-Maurice high in the Rhône-Alpes. The parcours differed because for many years it had closely followed the borders - now, with Europe on the brink of war and worrying news from Germany, the race turned north-west at Annecy and headed through France via Dôle, Dijon and Troyes to Paris, remaining well away from the German frontier. Finally, the riders had at long last realised that Henri Pélissier had been right 20 years earlier - it made sense for an athlete to follow a controlled diet designed to enhance their performance. As a result, they began to take vitamin supplements.


"I'm so glad that now that summer is approaching we have an event that makes us forget the dark political events that are taking place. The Tour de France is something of an armistice of the heart." - Henri Troyat

Neither Germany nor Italy sent teams, nor did Spain as it was torn apart by civil war. This posed a problem for organisers, so for the first time four French regional teams were selected. The Belgians were also permitted to send an A and B team. The main French team wasn't considered the best to ever contested the Tour - André Leducq had retired a year earlier; his most obvious replacements were Georges Speicher, Antonin Magne and Roger Lapébie, but none of them were taking part. Therefore, the Belgians were favourite. 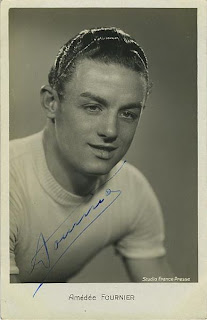 Amédée Fournier won the first Tour stage of his career in Stage 1 after crossing the line first among a group of nine (he won the last of his career in Stage 5 too), but with Romain Maes finishing in second place and recording the same time nobody expected the maillot jaune to stay put for long. In fact, it changed hands the very next day during the Stage 2a individual time trial, when Maes won by 1'24" - and as he was a previous Tour winner, fans assumed he'd hang onto it for a few stages. He did not: that same afternoon he finished Stage 2b 9'36" and in 37th place behind an escape group led by Eloi Tassin (who would become the first post-war French road race champion). Jean Fontenay became overall leader, and with René Vietto 2'10" behind him it was only because of the plain parcours that he kept it for two days.

Vietto became leader after escaping with a group of eight during Stage 4; seemingly an unusual move for a climber as he'd have a hard job defending it on the plain stages to come - his overall advantage remained 6" all the way to the Stage 8b time trial. In that stage he beat the majority of his rivals, increasing his advantage to 58". However, the next day Edward Vissers attacked and got away from the peloton. A chase group - including Vietto - went after him, but he crossed the line 4'04" ahead of them; meanwhile Sylvère Maes (who wasn't related to Romain and presumably had no interest in catching Vissers, who was a member of the Belgian B team he captained) had tagged along with the chase group as a good way of getting himself to the finish faster than the majority of the pack. As the line approached he sprinted past and took second place, thus jumping into second place overall with a 2'57" disadvantage to Vietto. This situation remained the same after Stage 10a, but the gap then increased to 3'19" after the Stage 10b individual time trial; this time it remained the same until Stage 12b when Maes came second, recording an equal time to stage winner Maurice Archambaud, while Vietto was sixth and 1'30" down - Maes' disadvantage was slashed to 1'49". Once again, nothing changed for a couple of stages.

This led to an interesting situation. Vietto was purely a clumber, Maes was thought to be better on the flat - and there were three mountain stages, three plain stages, one mountain time trial and one plain time trial left. In general, it's easier for a climber to win time in the mountains than it is for a rider who prefers flat terrain in the plain stages, however, and so it was widely believed that Vietto would win the Tour on the Alps. Things did not go according to plan: Vissers led over the Allos and Vars, then - as has happened so many times in Tour history - Izoard changed everything. Maes attacked and easily outclassed Vietto, who found himself completely unable to respond and, by the end of the stage, in second place overall with with 1'49" advantage transformed into a 17'12" disadvantage. Then, in the Stage 16b mountain time trial on Iseran, Maes beat him by 9'48" to increase his lead to 27' - and the only way Vietto could have won after that would be if Maes abandoned. He did not, and even added more time over the remainder of the race; at the end of the final stage the Belgian's advantage was 30'38", the largest winning margin for ten years.

The race ended on the 30th of July. 33 days later, on the 1st of September, Nazi Germany invaded Poland; two days after that France and Britain declared war on Germany. There wouldn't be another Tour for eight years.


Hélène Dutrieu
Born in Tournai, Belgium on this day in 1877, Hélène Dutrieu became arguably the world's first female cycling superstar. Her father, an officer in the Belgian Army, seems to have been of the unusually enlightened opinion that girls and young women should be permitted to have ambitions other than marriage and children; having been raised in such a healthy and nurturing environment she decided after leaving school at the age of 14 to make her way in the world of work. We don't know when she began riding a bike, but there's a good chance that like many of the male cyclists who turned professional in those days she used a bike to get to work and discovered she was good at riding it - and at the age of sixteen she turned professional with the Simpson Lever team.

In 1895, Dutrieu set a women's hour record and she won the World Speed Track Championships in Ostend in both 1897 and 1898, becoming a household name and earning the nickname La Flèche Humaine. In August 1898 she also won the Grand Prix d'Europe, then a few months later the Course de 12 Jours in London - for which she was awarded the Cross of St André by the king of Belgium. In those days, it was impossible for even a woman as talented as Dutrieu to make a living from racing (even now, more than a century later, the vast majority of "professional" female cyclists are forced to find work between races); so she began appearing at variety shows and public events as a stunt rider, one of her most famous stunts being to ride a vertical loop. She also performed stunts on a motorbike and in cars, later becoming a racing driver.

In 1910, Dutrieu became the first woman to pilot a plane with a passenger; later that year she became the fourth woman in the world (and the first from Belgium) to earn a full pilot's licence, after which she became a stunt aviator with a new nickname - The Girl Hawk - and won numerous competitions and set new records (and caused a minor scandal when she revealed that she didn't wear a corset when flying). In the First World War she drove an ambulance between the trenches and was later installed as director of a military hospital, then after the conflict ended she became a journalist. When she married in 1922 she took French nationality, later becoming vice-president of the women's Aero Club of France and established the Coupe Hélène Dutrieu-Mortier, an award of 200,000 francs for the female Belgian or French pilot to have completed the longest flight in any one year. She died on the 26th of June 1961, aged 83. (For a similar character, see Marie Marvingt - the woman who applied to ride the Tour.)


Víctor Hugo Peña, born in Bogota on this day in 1974, was recruited to the US Postal team in 2001 as a domestique serving Lance Armstrong. He rode the Tour in that capacity that year, again in 2002 and then again in 2003 - when, following the team's successful time trial in Stage 4, he became the first Colombian to have ever worn the maillot jaune. He kept it for three stages, then Richard Virenque took it for a single stage in the Alps before it went to Armstrong for the rest of the race.

Davis Phinney, born in Boulder, Colorado on this day in 1959, became the second American rider in the history of the Tour de France to win a stage in 1986. A devastatingly fast sprinter when at his best, he claims (with some justification) to have won more races than any other American cyclist. In 1999, aged 40, he was diagnosed with Parkinson's Disease; together with wife Connie Carpenter-Phinney (also a professional cyclist and three-time National Road Race Champion) he created the Davis Phinney Foundation, a charitable organisation that seeks to improve the lives of others with the disease. Their son, Taylor, is also a famous professional cyclist.