The tenth edition of Liège-Bastogne-Liège was held on this day in 1920, 28 years after the race was first organised. The parcours covered 245km and the winner was Léon Scieur - who had been taught to ride a bike by his next-door neighbour Firmin Lambot and would win the Tour de France the following year. The race has never again fallen on this date.

Born in Brasschaat on this day in 1986, Pieter Jacobs won the Belgian Under-17 National Road Race Championship in 2002. In 2005 he got his first professional contract with Amuzza-Davo and remained with them for four seasons as the team transformed into Unibet, finishing the Tour of Ireland in fifth place during his last year with them. In 2008, riding for Silence-Lotto, he was third overall and also third on points in the Tour of Turkey; then entered his first Grand Tour, the Vuelta a Espana, where he finished Stage 15 in 15th place and was 91st overall, simply finishing a first Grand Tour being considered a perfectly respectable result for any rider. The next year he was at the Giro d'Italia. He was 130th, but with one stage of 262km (including an ascent of Sestrière), an extremely mountainous Stage 16, high temperatures and numerous favourites battling it out for a win due to the absence of Alberto Contador, the bar had been set unusually high and once again merely surviving the race was an achievement.

2010, 2010 and, at the time of writing, 2012 have been quieter years, though Jacobs has had some good results in the criteriums and one-day road races including the 2010 GP d'Ouverture, where he was sixth behind Hivert, Hoogerland, Dumoulin, Cummings and Di Grégorio, and at the 2012 Classic Loire Atlantique where he was seventh. His palmares is that of the rider with much more to give, and it's highly likely we'll see more of him now that he is entering his best years.

René Le Grevès
René Le Grevès, born in Paris on this day in 1910, won Paris-Reims in 1930 and 1931, a silver medal at the 1932 Olympics and then turned professional with Armor-Dunlop a year later. In his first year with them he won Paris-Rennes and Paris-Caen; in his third the Critérium International, the Circuit du Morbihan and Paris-Tours and in his fourth the National Road Race Championship. Switching to Mercier-Hutchinson in 1937, where he remained for the rest of his career, he won another Critérium International and numerous other races before his retirement in 1941.

Lucy Tyler-Sharman
Lucy Tyler-Sharman, was born in Louisville, Kentucky on this day in 1965 but did most of her racing for Australia. During her youth, she was a talented swimmer, which led her to triathlon and then to criterium racing, then in 1988 she began track cycling. Two years later, she traveled to Australia to train and met, then married, Martin Vinnicombe, who had won a silver medal for the 1km time trial at the 1988 Olympics.

One year later, as the couple trained at a Pennsylvania velodrome, they were visited by anti-doping officials from the Canadian Federation following a tip-off from other Australian riders. Vinnicombe's sample was subsequently found to be positive for steroids, and he was handed a two-year ban. However, he had recently suffered tendon damage and had been prescribed steroids to treat it, which resulted in an out-of-court settlement after which the ban was overturned. A two-year embargo, preventing him from competing, remained in place and, for reasons of their own, the couple chose not to challenge it - which brought an end to Martin's career.

In the years afterwards, the marriage broke up and Lucy won a place at the Australian Institute of Sport, then took a fourth place at the 1994 World Track Championships in Palermo, Sicily. That year she met Graham Sharman, who would become her second husband in 1995 shortly before she took the decision (based on advice from Australian coach Charlie Walsh) to concentrate on track endurance in future and she immediately showed great potential, making her a favourite for the National Championships in 1995. However, she was beaten in the 3,000m Pursuit by Kathy Watt, then suffered a severe asthma attack during the Points race. As a result, Watt was guaranteed a place at that summer's Olympics provided another Australian rider didn't break the Pursuit record in the meantime - which Tyler-Watt subsequently did by 5" and took her place. Watt responded with an ultimately-successful attempt to get back her place, and whereas Tyler-Sharman wasn't selected to ride with her in the Pursuit team, she won bronze for the Points.

In 1996, Tyler-Sharman set a new World Record during a qualifying round at the World Championhips in Manchester before coming second behind the legendary American-born cyclist Marion Clignet, who was turned down by US Cycling on account of her epilepsy at the age of 22, then rode for France and won them eight World Championship gold medals. In 1997, she won two gold medals at the Oceania Track Championships, followed them up with another two at the Victoria, Canada round 1998 World Cup and another in Berlin - and then became World Pursuit Champion in Bordeaux.

During the Commonwealth Games on 1998, right after she was beaten in the Pursuit semi-final, Tyler-Sharman launched an angry verbal attack on the management of the Australian team in general and Charlie Walsh in particular, claiming that their decision to make her ride on pedals with which she was unfamiliar was deliberate sabotage. While many fans sympathised and saw no reason why she shouldn't be allowed to used any UCI-approved pedals she liked, she was sent home - the only Australian athlete to have ever been similarly punished at the Games. Now retired, she has returned to Pennsylvania and works as a coach.


Sarnya Parker, born in Loxton on this day in 1975, had already enjoyed a career as one of Australia's top ten pentathletes when she took up paracycling in 1999 after the sport was recommended to her by another visually-impaired rider, Kieren Modra. Modra's sister Tania, who had limited riding experience, became her pilot. Only 18 months later, they broke the World Records fort he 1km road race and 3,000m Pursuit, winning gold medals for both events, at the 2000 Paralympic Games.

Paul Lake, another Australian paracyclist, was born in Melbourne on this day in 1970. At the same 2000 Games, he won a gold medal in the Mixed Team Olympic Sprint LC1–3 and, like Sarnya and Modra, was later awarded the Order of Australia.

Yet another Australian cyclist to be born on this day, in this case in Adelaide in 1968, David Solari held dual Australian and Italian citizenship. In 1985, he won the Junior Pursuit Championships in both countries and is the only athlete in the history of cycling to have been National Champion in two different nations at the same time.


George Albert Newberry was born in Burton-on-Trent on this day in 1917 and, in 1952, he went with Ronald Stretton, Donald Burgess and Alan Newton to the Olympic Games where they won bronze medals for the 4,000m Team Pursuit. Wikipedia says he's still alive, but he isn't: he died on the 29th of December in 1978 when he was 61. I'd correct it, but one of their admins banned me a couple of months ago when I corrected another one of their "facts," so they can shove it. 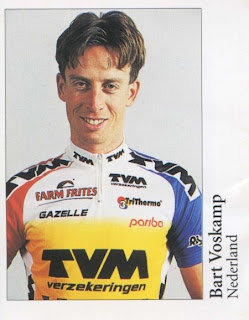 Born in Wageningen on this day in 1968, Bart Voskamp was Dutch Time Trial Champion three times (1991, 2000, 2001) during his thirteen professional seasons and earned himself a repectable reputation as a sprinter, too. He won Stage 17 at the Vuelta a Espana in 1994, then Stage 8 in 1997; as well as Stage 18 at the Tour de France in 1996. He was first over the line at the end of Stage 19 at the Tour in 1997 too, beating the German Jens Heppner by fractions of  second; but both men were subsequently disqualified after it was decided that their own conduct was to blame for contact between them in the sprint and the stage win was awarded to third place Mario Traversoni


Jan Adriaensens, born in Willebroek, Belgium on this day in 1932, won the Tour of Morocco in 1955, the Four Days of Dunkirk in 1956 and Stage 3 of Paris-Nice and Stage 7 of the Vuelta a Espana in 1957. He also achieved notable success in the Tour de France, coming third overall in 1956 when he wore the maillot jaune for three days and beat Federico Bahamontes, who won in 1959; then third again in 1960. He was fourth in 1958 when he wore the maillot jaune for four days and beat Gastone Nencini, who would win in 1960. In 1959, he won a silver medal in the Belgian National Championship road race.