Tour of the Gila
For the men, 128.7km Stage 2 both started and finished at Fort Bayard - a historic frontier fort that was once home to the Buffalo Soldiers (for a brief history of them, click here). They then reached the first Cat 3 climb at 16km and climbed to 2,164m, then the second began at 24km and climbed to 2,361m. After crossing the Continental Divide (with an uncategorised climb of, oh, only 2,045m) they headed to a final and very steep Cat 3 at 100km, climbing to 2,070m before the descent and last 16km back to Fort Bayard. The women used a similar parcours but missed the first 25.4km and climb, beginning instead at Pinos Altos. The remainder of the route was identical to the men's.

Janel Holcomb, Carmen Small and Jade Wilcoxson (all Optum Presented By Kelly Benefit Strategies) had formed a break with Kristin Armstrong  (Exergy Twenty 12) just before the 40th kilometre, a situation that looked highly dangerous for Armstrong as it separated her from her own team, and precisely what Optum were aiming for as was revealed by Small after the race. They were joined by Optum's 21-year-old Courteney Lowe, who livened up an already exciting race by taking Robin Farina (Now and Novartis) with her in an attack, a move intended to give Optum chance to recuperate before doubling their efforts against Armstrong - but which also gave Exergy time. In the end, Armstrong's amazing form this season allowed her to lead the women over the line for the second day in a row, though this time around - without the tough climb to the finish that saw her record a time 2'18" ahead of her nearest rival - she was closely trailed by Holcomb, who took the same time. Carmen Small was 26" back.


Whilst the fastest women came across in small groups, the majority of the men finished in a large bunch sprint followed by two smaller groups at +16" and +20". Numerous attempted breaks tried their luck early on and never got anywhere until , Javier Megias (Type 1),  Chris Parrish (Optum), James Stemper (Kenda 5 Hour) and Thomas Rabou (Competitive Cyclist) got away and gained a 55" lead, later bridged by Carlos Lopez (Mexico NT) and Evan Huffman (Giant). However, when  they were caught at 107km a bunch sprint  immediately looked inevitable. 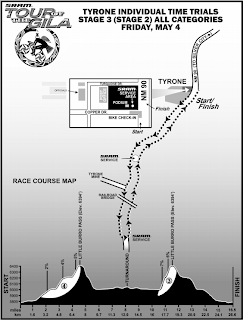 The Stage 3 individual time trials take place on a 26.6km parcours with two testing climbs - the first, a Cat 4 beginning 2km into the race, involves around 600m of climbing to a summit 1,949, above sea level, though the maximum gradient is not especially challenging. The second is the same mountain, approached from the opposite side on the return journey - and it's much steeper from this angle, rating Cat 3. The start and finish line is located in Tyrone, a community built for the then huge sum of $1 million in 1915 and designed to resemble the grand cities of Europe. In 1921, when copper prices worldwide dropped and the local mines closed, the town was deserted and what wasn't later destroyed by an open cast mine in the 1960s has remained a ghost town ever since.

Stetina hit by car 24 hours before Giro
Only hours after Sky's Ben Swift announced that he would have to miss the Giro d'Italia, Peter Stetina looked disaster in the face when he was the victim of a hit-and-run in the Danish city Herning - where the race will start on Saturday.

Whilst his bike was reportedly damaged badly in the accident, Stetina is said to have been able to get up and walk around immediately; making it look likely that provided tests reveal no cause for concern he will still be able to compete. The car's registrattion plate was noted and reported to police. Sporten TV2 have video of the incident.

Italian Fed clarify rule changes
After yesterday's news that the Federazione Ciclistica Italiana was to abandon its rule blocking riders who have served a suspension of six months or more from the National Team, the organisation used the Gazzetta dello Sport to clarify that the new policy applies only to the National Championships - riders previously ineligible to represent the country in international competitions, including the Olympics, will remain subject to the ban.

The British Olympic Association had previously operated a similar ban, overturned this week by the Court for Arbitration in Sport after the World Anti-Doping Agency contested an appeal to keep it in place. It's not yet known if WADA will also order the FCI to abandon the rule. (For more details, see Cycling News)

Belgian driver fined and imprisoned for three months after Vanmarcke accident
A Belgian named only as Francois D. has been fined 550 euros and sentenced to three months in prison after a court in Oudenaarde heard how he had become enraged when Sep Vanmarcke (Garmin-Barracuda) and his older brother Ken ran a red light and pulled into the road in front of him on the 27th of July last year. According to the brothers, the driver then drove at slow speed in front of them to block their path, then when Ken tried to overtake he accelerated, swerved suddenly and braked - knocking him and his bike off the road. ""Had I not have been so alert, I might now be in a wheelchair," claimed Ken, who works as a postman.

"The court apparently completely forgot that the brothers blazed straight through a red light," Francois D.'s lawyer said. "We will definitely appeal."

2012 Exergy Tour poster unveiled
The race will take place between the 24th and 28th of May with a prize fund of $100,000 - believed to be the largest in the history of women's professional cycling. 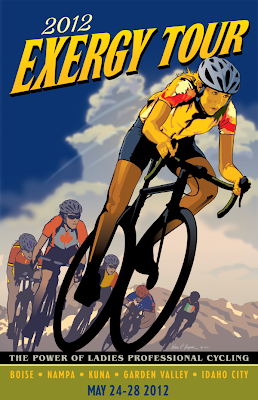 Other News
"The Giro d'Italia will be the first time Australians Matt Goss and Mark Renshaw, and British rider Mark Cavendish, have ridden in the same Grand Tour since last year's Tour de France" (Wide World of Sports)

Worldwide
"Almost half of the serious injuries caused in Sweden’s traffic accidents involve cyclists" (The Local)
Posted by john_orbea at 17:30