Fist fight at Amstel Gold rumours - Ronde van Gelderland - Halle Buizingen - Amstel Gold useful form guide for the Worlds - The London Big Ride - Newspapers
A fight at the Amstel Gold?
According to rumour, a fist fight broke out among riders during the Amstel Gold Race. There are no details on who was involved, though it's said that it may have been some of the top names, nor precisely when and where the incident is supposed to have happened.

Ronde van Gelderland
It's all too easy to forget that other races are taking place at the same time as a big event such as the Amstel Gold, but the Ronde van Gelderland (UCI 1.2) is a race that attracts an interesting mixture of the world's best female riders and those who are not so well-known, which tends to result in the top names riding for their lives as the hopefuls attack all the way to please sponsors and secure their own slice of the glory cake. This is very much true of the 2012 edition, in which the likes of Shara Gillow, Judith Arndt, Loes Gunnewijk, Hanka Hupfernagel, Iris Slappendel, Kirsten Wild and Lizzie Armitstead face a field 167 riders strong.

The parcours is one that definitely favours strong sprinters with all the climbs - some of them considerable and rising to around 110m - over and done with within the first 50km; after which it's fast and flat all the way to the finish. An interactive, zoomable map is available here. Favourites? Kirsten Wild is the rider many people will be watching, but Lizzie Armitstead is in with a very good chance too. Meanwhile, if a break gets away on the climbs or immediately afterwards, the race is likely to go to whoever is its strongest rider.

The race begins in Appeldoorn at 13:00BST (14:00 local time/CEST). As tends to be the case, it won't be televised - for updates follow Karl Lima, manager of the Hitec Products-Mistral Home team. The official race website is here.

Halle Buizingen Pijl
Gelderland is not the Low Countries' only UCI 1.2 women's race today - the Halle Buizingen Pijl kicks off at 13:30BST (14:30 local time/CEST)  at Buizingen in Belgium. First raced last year when Martine Bras won, details of this year's event are rather sketchy; however, maps, profiles and technical details are all available here. Cycling Fever have a start list; but scanning through it real reveal a few riders who are apparently racing in this event and the Ronde van Gelderland at the same time today, which seems a little difficult even by professional cycling standards. Precisely who was at which race will be revealed in the results. 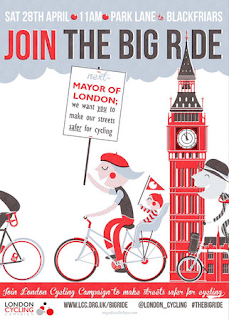 Join the Big Ride
You either think that the Government's attempts to promote cycling are a genuine, heartfelt attempt to - er - promote cycling or you think they're a load of cynical Tory evilness designed to make it look as though they're doing something about sustainable transport and the environment so that people won't be on the look-out for MPs pocketing massive bribes from fat-cat polluters, but either way cruising through one of the world's greatest cities with several thousand other cyclists is an experience not to be missed. For that reason, regardless of your feelings on current transport policy, the London Cycling Campaign's Big Ride is worth a look. Taking place on the 28th of April, the ride is intended to raise awareness among the city's five mayoral candidates of its Love London, Go Dutch campaign, which seeks to improve cyclist safety. Similar events will be taking place in Edinburgh and Rome on the same day.

Cycling in the Newspapers
"All athletes harbour strong competitive instincts instilled in them by parents, peers or prior disappointment. For Cavendish, however, it appears to be something he was born with. He was determined to conquer..." (Daily Telegraph)

"The kind of man who might once have bought a sports car to show off his status is driving today’s boom in 'premium’ bicycles." (Daily Telegraph)

"...a wave of enthusiasm for cycling that is sweeping through the Square Mile. It has become the sport of choice for the City’s alpha males and females..." (Financial Times)
Posted by john_orbea at 12:32