"We're prepared for anything at Milan-San Remo!"

Cyclopunk ace reporter Spyclopunk, currently in Milan where he's using his incredible master of disguise skills to capture photographs of the teams preparing for the race, got chatting to the mechanics of one of the teams yesterday and - after promising them a bottle or ten of wine - persuaded them to let him have two minutes alone with their new top secret bike.

"They didn't want me to say which team they're from, but you have my word for it that this is a genuine story," he says. "I'm not really at home watching daytime TV and sending in pictures of stuff off There I Fixed It in an attempt to get away without actually doing any real work - you can check that with my mum if you don't believe me." 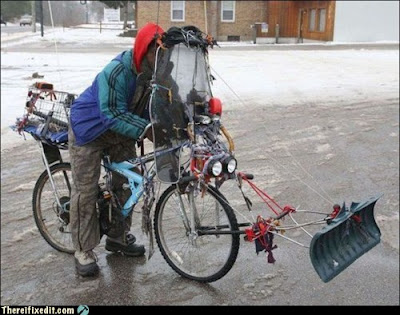 "Anyway, the squad is mindful of the fact that conditions can turn nasty up on the Passo del Turchino and they don't want to get caught out like the riders did back in 1910 when there was so much snow only four out of 63 riders made it over the climb - so they've had this special bike built to clear the way for their sprinters. They say they'll use it to push Cav out of the way too if they get a chance. The cage on the back is in case they encounter any hitch-hiking marmots along the way."
Posted by john_orbea at 12:54