More GreenEDGE victories as Albasini wins twice in Catalunya
Michael Albasini of GreenEDGE took a second stage victory at at the Volta Ciclista a Catalunya on Tuesday afternoon, having won Stage 1 after spending a large part of the race in break with Timothy Duggan (Liquigas-Cannondale), Ben Gastauer (AG2R La Mondiale), Anthony Delaplace (Saur Sojasun) and Nicolas Edet (Cofidis) for company, the five men achieving a lead of 6'05" for a while.

On Monday, the peloton seemed content to let them get away with it for just a little too long - when it was eventually decided that the gang of five needed to be put back in their place, it rapidly began to look as though they'd been left just a little too long. The gap was shortened to around three minutes as the race entered the final 25km of the 138.9km total, but it was by now clear that the break had worked. Delaplace fought him all the way to the end after Edet had had enough, but he wasn't fast enough to prevent the 31-year-old Swiss rider crossing the line with a 42" advantage. Edet then took third, 1'14" down on the winner. 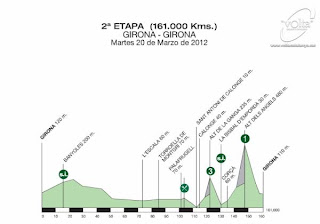 Tuesday's Stage 2 was an entirely different beast. 161km in length, it featured a tough climb in the form of Alt dels Angels - though only 480m in height, the road to the top is sufficiently steep for the mountain to be graded Category 1, the second-toughest of all, and 235m Cat 3 Alt de la Ganga some 15km before the Angels got under way had already taken its toll on the riders' legs. Starting and ending at Girona ( once home to George Hincapie, Tyler Hamilton and Lance Armstrong), the parcours looped north and then east up to Salvador Dali's birthplace Figueres, then south and west to the mountains and back to the city.

An early break consisting of Jordy Simon, Julian Sanchez and Cyril Bessy got ahead early on in the race and for a while had seven minutes on the peloton; but they were swept up with 42km to go when the Alt de la Ganga proved too much for them. Tejay van Garderen and others attacked on the way up the last climb but their attempts failed to have the effect they wanted, leaving several riders with plenty enough energy to form a lead group as the end of the stage drew near. GreenEDGE had done a fine job of getting Albasini, who is more of an all-rounder rather than a climbing specialist, over the mountains and into the final kilometre; which is where he made his move, following Uran to within 200m of the line and then using his considerable skills as a sprinter to power past and beat the twenty riders who went with him by a tiny margin. Dario Cataldo took second place, followed by Sky's Rigoberto Uran in third. (Full stage results when available.)

Tomorrow, they face the 210km Queen Stage and the Hors-Categorie Ports del Canto and Aine; at 1,730 and 1,947m respectively, the most challenging climbs in any of the seven stages.

Omega Pharma-QuickStep's Sylvain Chavanel has been given a clean bill of health following the recent bout of bronchitis that forced him to miss Milan-San Remo and seriously messed up his plans at Paris-Nice. The 32-year-old Frenchman recovered significantly quicker than expected and, having originally said he'd be taking this week off, will now ride in Wednesday's Dwars Door Vlaanderen.

Right after yesterday's reports that Rein Taaramäe and Thor Hushovd are having to take a break due to illness comes news that Katusha's Joaquim Rodriguez, one of the strongest climbers in the contemporary peloton, has developed tendinitis - probably as a result of new shoes at Tirreno-Adriatico. Team doctors will now concentrate on getting him well in time for the Vuelta Ciclista al País Vasco, which he led for four of six stages last year before a disastrous Stage 6 time trial left him outside the top ten in the overall General Classification.
Posted by john_orbea at 10:24