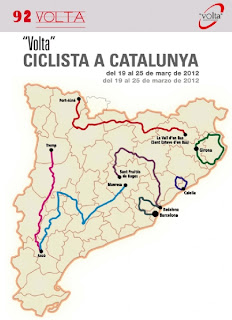 The week-long Volta Ciclista a Catalunya - Spain's second most prestigious cycling event after the Vuelta a Espana Grand Tour and the third oldest stage race in the world, first run in 1911 - kicks off today with a 138.9km stage starting and ending at Calella on Catalonia's Costa del Maresme. The start list looks like this, and Cyclopunk reckons Astana's Egor Silin will do well today - but so might one of the younger Euskaltel-Euskadi riders.

It's an exciting race for fans from around the world, not just from Spain, because this is the first of the European races in which the riders face the first "proper" mountains - Category 2 Alt di Villedrau's summit just before the 60km point reaches 903m and Category 1 Alt del Collformic hits 1,140m a little over 20km later.

Stage 2 is 161km in length with a highest point - Alt del Angels - only 480m above sea level, but the slopes are far steeper than those in Stage 1 and for that reason the mountain receives the same category as Collformic. Stage 3 (La Vall d'en Bas (Sant Esteve d'en Bas) to Port-Ainé) is the Queen Stage and a real challenge by anyone's standards - 210.9km long, it features two Hors-Categorie mountains in the looming shapes of the Port del Canto with its 1,730m summit located 165km along the parcours and a summit finish on Port Aine, 1,947m up. As though those weren't enough, riders need to get over two Cat 1 climbs on the way: Alt di Coubet hits 1,031m and Collada de Toses 1,800m. Total climbing on this stage is 6,597m. Stage 4, Tremp - Ascó, returns us to something more like humanly possible, the 199km topping out at 675m. Stage 5 covers 207.1km from Ascó to Manresa with a Cat 1 and Cat 2 on the way. Stage 6 runs between Sant Fruitós de Bages and Badalona Centre Comercial Màgic, 169.4km with three Cat 3s, then Stage 7 takes the race from Badalona Centre Comercial Màgic into Barcelona, 119.8km away and over three Cat 3s and a Cat 2. Further details on each stage, results and news will be published here each day.
Bradley Wiggins leads Team Sky who will no doubt be eager to repeat their Paris-Nice success, especially in the wake of a crushing defeat for Mark Cavendish and team mates at Milan-San Remo. He's No. 151 and the rest of the team are as follows:


An auto-translated ticker is available here and Eurosport are showing one hour of the race live at 15:00 daily, with highlights on Eurosport and Eurosport 2 at various times.

Doctor connected to cycling arrested with substances believed to be doping products
Dr. Alberto Beltrán Niño - who previously had links to numerous professional cycling teams - was arrested in Spain as he tried to board a flight to Colombia on the 8th of March, according to a report in El País.

Officials confiscated substances believed to be 5-Aminoimidazole-4-carboxamide ribotide - a drug for which there is little data related to prevalence of use, despite its suspected presence at the 2009 Tour de France - and TB-500. 5-Aminoimidazole-4-carboxamide ribotide, known as AICAR, causes dilation of the blod vessels and thus permits larger amounts of oxygen-carrying blood to be pumped to the muscles within a given time, which increases strain on the heart and over time could lead to cardiac failure. TB-500, the drug that led to Wim Vansevenant's arrest prior to the Tour last year, promotes muscle growth. Neither drug has been detected in anti-doping controls to date.

Dr. Beltrán has been the subject of an investigation named Operacion Skype, begun in Barcelona after he was reported to have sold a form of EPO at the Vuelta a Espana, and it's not the first time he has been connected to doping - in 2001, when he worked for the Selle Italia team, he was arrested whilst in possession of a large amount of doping products.

A laptop and USB flash drives belonging to the doctor have also been seized, presumably in the hope of finding the intended recipients of the drugs.
MSR organisers: "We'll have to modify it, to make it a bit harder"
Most of cycling's great races have changed considerably since they began, some now being much longer and some much shorter. Milan-San Remo has changed less than most with a broadly similar parcours used every year, though climbs have been added over time. The Passo del Turchino, Le Manie and three Capi have been there since the early days but, as riders became more professional and the mountain no longer had any influence on the outcome of the race, it was decided that the sprinters shouldn't have it all their own way.

Thus, the Poggio di San Remo was added in 1960 and, once it became apparent that it too wasn't breaking up the peloton, Cipressa joined it in 1982. Now, organisers have decided that the race needs another climb and are looking at changing the route for 2013. "Now, a race that does not spare the attacker the ability to finish alone is no longer a race," director Mauro Vegni explained to L'Equipe.

Mark Renshaw ‏ @Mark_Renshaw
Whats wrong with the organisers of Milan San Remo? Its one of the best races of the year!

Other News
Cofidis rider Rein Taaramäe has been diagnosed with mononucleosis, the viral disease commonly known as glandular fever. Doctors recommend that athletic activity be limited or closely monitored in sufferers to reduce the risk of splenic rupture, which combined with variable recovery times means could lead to the 24-year-old Estonian having to stay away from competition for some time.

Thor Hushovd, who suffered at Paris-Nice with the same stomach complaint that took many riders out of the race, will miss the Volta Ciclista a Catalunya after contracting a fever. The 34-year-old Norwegian, one of the most popular riders of the current generation, will concentrate on making a full recovery in time for Paris-Roubaix on the 8th of April - a race he has dreamed of winning for many years.


Carlos Quintero escaped his crash at Saturday's Milan-San Remo with a fractured collarbone, grazes and bruising, his Colombia Coldeportes team have confirmed. The 26-year-old hit a stone wall at speed during the race and was knocked unconscious, leading to widespread concern among commentators and fans when helicopter footage showed him not moving and being strapped to a backboard. However, medics quickly confirmed that he had woken within minutes, could move his legs and was able to recognise people around him.

Three British teams - Endura Racing, Rapha-Condor-Sharp and GB Academy - will be competing in this year's Tour of Normandy, won last year by Alex Blaine who rides again in 2012 with Endura. (More details from Velo UK)