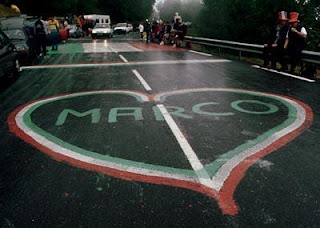 For the first time, the Tour visited Ireland - the prologue was in Dublin, Stage 1 started and ended in Dublin and Stage 2 ran from Enniscorthy to Cork; then the teams sailed to Roscoff in Brittany for the start of the rest of the race. The number of teams was reduced from 22 to 21 in order to also reduce the number of riders, this having been declared the reason for a large number of crashes in 1997.

British rider Chris Boardman, a time trial specialist, won the prologue and started the race in the maillot jaune for the third time in his career. Erik Zabel took it in Stage 2, then lost it to Bo Hamburger the next day; next it went to the Australian Stuart O'Grady who kept it for three stages until 1997 winner Jan Ullrich got it in Stage 7. Ullrich handed it over to Laurent Desbians the following day but won in back in Stage 9 and, a few days later, looked very much as though he was going to keep it.

Then the race reached the Alps and Marco Pantani blew it apart. 48km from the end of Stage 15, he attacked so hard on Galibier that Ullrich was left reeling, completely and utterly unable to respond to the Italian's power. Pantani even stopped on the way to put on a rain jacket, but still took 8'57" from the man who was no longer his rival and finished the stage as overall leader with an advantage of 3'53" over new second place Bobby Julich (and 5'56" on Ullrich). The following day, Ullrich had to win simply to remain in contention and he did a very impressive job of doing so, leading the peloton over the stage's fifth and final climb; but Pantani stayed with him, and the gap between them remained the same. The German made up time with more superb performances, including his excellent ride in the Stage 20 time trial when he took back 2'35"; but what Pantani had done on Galibier was insurmountable and he won by 3'21" overall. 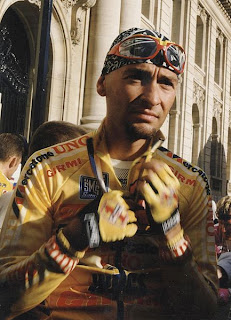 Pantani was one of the finest grimpeurs in cycling history; had it not have been for the problems he would later face, leading to his tragic death on Valentine's Day in 2004, he might even have topped the achievements of Federico Bahamontes and Charly Gaul. It is, therefore, a great shame that his only Tour victory was overshadowed by the scandals that hit the 1998 race. The first the world knew about a massive investigation into doping was when the Festina team's Belgian soigneur Willy Voet was stopped at the French border in a car packed with enough drugs to open a small but well-stocked pharmacy (he tells his story in his book, Breaking the Chain; a must-read despite suffering a little from Voet being a soigneur rather than a writer). Next came police raids on the teams' hotels, with another huge stash of doping products being seized from the TVM team, then a riders' protest in Stage 17 and the nullification of the stage. It didn't end there and, before long, what became known as the Festina Affair mushroomed into the biggest and most damaging scandal to have ever hit cycling and its effects are still being felt to this day.


Gérard Saint, born on this day in 1935, was a French cyclist who won the overall Combativity award and came ninth in the General Classification at the 1959 Tour de France. e became known as a good all-rounder, despite being unusually large at 1.91m tall for a rider who did as well in the mountains as he did, and was popular among fans because he worked as an unskilled farm labourer before becoming a professional cyclist. He died on the 16th of March 1960 after crashing his Citroen ID into a tree. A stadium in Argentan, the town of his birth, is named in his honour.

Ingrid Haringa, born in Velsen, Netherlands on this day in 1964, began her athletic career as a speed skater. She made her debut in international track cycling at the World Championships of 1991, where she won the Sprint and the Points race; then successfully defended the Points title for the subsequent three years.