Magne was known as an exceptionally shy character, termed "uninterviewable" by the journalist Jean Bobet (who would himself ride the Tour in 1955 and 1957 - and, in case you're wondering, was Louison's younger brother) due to his habit of clamming up whenever a journalist got anywhere near him. However, he could apparently be forceful, as is suggested both by his impressive talent on the bike and by the incident for which he is most remembered and which left the unfortunate René Vietto in tears at the side of the road at the Tour in 1934: Magne had dominated the race from the first stage, wearing the yellow jersey ever since (and would keep it throughout the race), despite disaster struck on the way to the spa town of Aix-les-Thermes during Stage 15 - he rode into a pothole and splintered his wooden front wheel rim. So that he could continue, he took team mate Vietto's wheel, leaving him at the roadside. He discovered a short way further along the road that his frame was damaged too, so he waited for the next rider from his team - Georges Speicher - and took his bike. Vietto, meanwhile, was still back where he'd been left waiting for a team car to give him another a wheel and had become so upset that his chances of winning the stage - and without a miracle, a good finish in the overall General Classification - that he'd started crying. A photographer took a picture which, when published, pulled on the heart strings of the French public who nicknamed him King René, proclaimed him to be the moral winner of the Tour and adored him forever more for his willingness to sacrifice himself. It's a clever bit of propaganda, too; artfully clipped so Vietto looks as though he's all alone in the world, despite the fact that quite a sizable crowd had gathered to look after him. He would make a fortune from the fees he could charge to appear at criteriums in the future. 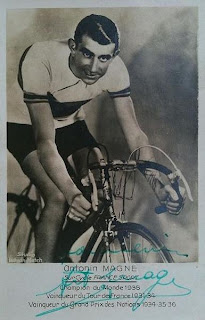 So, was Vietto the hero without whom Magne would not have enjoyed his second win? Perhaps, but he rather disgraced himself afterwards with vitriolic attacks on his team leader, during which among other insults he accused him of being a poor rider, and continued to bear his animosity for the remainder of his life. Magne, on the other hand, was grateful for what Vietto had done and thanked him personally. (More on Vietto in two days' time, the anniversary of his birth.)

Óscar Freire
Óscar Freire, born in Torrelavega, Spain, on this day in 1976, became one of the cycling world's most admired sprint specialists and won three editions of Milan-San Remo - one of only seven riders to have done so since the race began in 1907. He may have achieved even more were it not for the injuries, illnesses and accidents that have punctuated his career with many races missed due to recurring spinal problems. He and Julien Dean were shot with an air rifle during Stage 13 of the 2009 Tour de France - a pellet hit him in the thigh and he finished the stage in 117th place. Dean was hit in the index finger while a third shot missed the peloton (perhaps coincidentally, Nicholas Roche had been involved in a similar incident a few days before and reported that he had been shot in the back of the leg. However, doctors who examined the bruise left by the impact believed he'd been hit by a piece of an exploding ice-maker machine).

In addition to the above, Freire suffered even more than most Tour riders with a series of saddle sores. He also developed respiratory problems, undergoing surgery on his nose and sinuses which kept him away from the Tour in 2011 and caused him to announce that he would retire at the close of the season unless he won the World Championships (which has been his first major win back in 1999; he spent his prize money on having an elevator fitted in his grandmother's apartment, ensuring status as one of the nice guys of the peloton and massive popularity among fans - and with his grandmother, one assumes). He didn't win, but apparently decided that his ninth place was sufficient indication that he still had a future on the bike and, when Rabobank declined to extend his contract, started looking for a new team. Katusha took him in after he chose them over Lotto-Belisol, Omega Pharma-Quickstep and several other teams that showed interest and, right from the start of the season, he showed signs of having fully recovered from the health problems of the previous year, beginning with a stage victory at the Tour Down Under. After winning another stage at the Vuelta a Andalucia, he embarked on a highly successful Classics campaign that saw him take seventh place at Milan-San Remo, second at the E3 Harelbeke, fourth at Gent-Wevelgem, twelfth in the Ronde van Vlaanderen, second in the Brabantse Pijl (where he led a group of chasing riders battling for second place after Thomas Voeckler's solo break had already won) and fourth in the Amstel Gold Race. He then finished in the top ten on two stages at the Tour de Suisse and was seventh on Stage 5 at the Tour de France before repeating his earlier claim that if he didn't win the World Championships he would retire.

This time he was tenth; According to a report in Spanish newspaper El Pais, he was approached after the race by Euskaltel Euskadi with a deal that would have seen him become a member of the team without having to actually race or train so that the team could use the UCI points he'd have brought with him to help secure a World Tour licence, a claim denied by Euskaltel manager González de Galdeano who insisted that although his team had shown interest in taking Freire on, it had done so some months prior to the Worlds and had then raised the possibility of him joining as a coach rather than a rider when he made it clear to them that he was going to retire. At the time of writing it seems that his words carried more weight than previously and it appears he has retired for good.

On this day in 2011, Tour winner Alberto Contador, widely considered the best cyclist of his generation, was cleared of doping by the Spanish Cycling Federation. His case would later be taken to the Court for Arbitration in Sport by the UCI and, following a lengthy investigation, he was handed a back-dated two year ban and stripped of numerous victories, including Grand Tours.