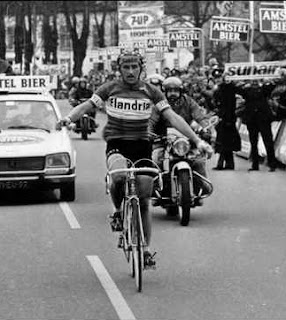 Freddy Maertens, born on this day in Nieuwpoort, Belgium in 1952 was the rider who did the unthinkable in 1981 - at the World Championships in Brno, he beat Beppe Saronni and Bernard Hinault.

That was just one of the many successes in his 14-year professional career. He'd already been National Amateur Champion (1971) and come second in the World Amateur Championships (1972) when he turned professional in 1973 - and that year, he won the Four Days of Dunkirk and the Scheldeprijs Flemmish Classic, took second place in the Tour of Flanders and the Worlds and managed an incredible 5th place finish at Paris-Roubaix, a race that few experienced professionals have any chance of finishing, never mind those in their first year. In his second year, he won the Flanders Championship, the Tour of Luxembourg, the Vuelta a Andalucia and a nice selection of stages in various races. As though that wasn't enough to prove to the world that a major new talent had arrived, the next year he won the Fours Days of Dunkirk, Gent-Wevelgem, Paris-Brussels, Paris-Tours, the Ronde van België, another Vuelta a Andalucia and seven stages at the Critérium du Dauphiné. He began showing promise on the track too.

In 1976, he topped even the previous year. He proved his track credentials by winning the Six Days of Dortmund with Walter Godefroot and won victory after victory on the road - he won the Amstel Gold Race, the Rund um den Henninger-Turm, Züri-Metzgete, Gent–Wevelgem, the Grand Prix des Nations, the Four Days of Dunkirk, Brabantse Pijl, the Flanders Championship, the Trofeo Baracchi (with Michel Pollentier), the Critérium des As and became World Champion. Grand Tour glory was, apparently, heading his way; as proved to be the case in 1977 at the Vuelta a Espana which he won by nearly three minutes, grabbing Stages 1, 2, 5, 6, 7, 8, 9, 11a, 11b, 13, 16, 19 and the Points Classification for good measure. Earlier in the year, he'd entered the Giro d'Italia and won Stages 1, 4, 6a, 6b, 7 and 8a. Plus most of the races already mentioned above and some more too. To really top it off, he received the Super Prestige Pernod International award - given annually to a cyclist who has achieved outstanding performance - for both of these years.

He seemed to slow down a little in 1978 when he was just 26, an age at which most cyclists begin to enter their peak. Slowing down is, of course, a relative thing: for Maertens, it meant settling for the Omloop Het Volk, the Four Days of Dunkirk, the Prijs Vlaanderen, the Tour du Haut Var and the Six Days of Antwerp (with Danny Clark), Stage 7a at the Critérium du Dauphiné and Stages 5 and 7 and the overall Points competition at the Tour de France - more than enough to fill an entire career's palmares for most professional cyclists, but a quiet year for Freddy. 1979 was worse: with just Stages 1a, 3, 12a, 13 and 22 and the Points Classification at that year's Tour, it was obvious that his best years had passed, though another World Championship stopped the year from becoming a total waste. Believed to be suffering from a mystery ailment, he travelled to the USA on the advice of his doctor Paul Nijs. His plane landed at New York, where he disembarked, and then flew on to Chicago. On the way, it suffered a mechanical fault leading to one engine breaking away from the wing. All 271 passengers still on board were killed.

Maertens was primarily a sprinter, a forerunner to Mark Cavendish in that once he had the finish line in his sights he was virtually unstoppable. Yet unlike Cavendish, he also had something of the rouleur about him - he could win stages, but he could keep going at a good rate on just about any stage he faced. So why didn't he win more Grand Tours?

There are two main reasons. The first, as noted by those of his opponents who were alert enough to take him in as he flashed past them, was that Maertens tended to push an unusually big ring - when they were in one gear, he was in one two or more higher. That'll make you go faster, provided you have the strength to avoid grinding to a halt, but over time it'll ruin your legs. Secondly, he admitted in retirement that he had used amphetamines in many of his races while maintaining that several of his major races had been ridden "clean;" the latter claim, since amphetamine testing was effective at the time, we can assume to be true with a reasonable amount of certainty.

Sadly, things would go badly wrong for Maertens once his career was over. He invested his winnings - which he estimates to have been £1.6 million, not including bonuses, retainers and all the other perks professional cyclists bring in - unwisely, some of it going to shady businessmen and a large amount into a disastrous nightclub named Flandria (owned by one of his earlier sponsors) which, having sucked in vast piles of cash, eventually burned to the ground. The Flandria company went bankrupt three years later, leaving Maertens without income - he says now that he wasn't paid for a year, which meant the government went after him for taxes. In the end, he and his wife Carine had to turn to his parents or face living on the streets. He had little luck in finding work and the couple faced many very difficult years.

Today, he works as a curator at a bike museum. It doesn't pay much, but it's enough to live on - and at least he can be sure that the income will be regular. After all, cyclists and fans from around the world will always want to visit it - its most valuable exhibit is one of the greatest cyclists of all time.

He won the Alpe d'Huez stage in 1978 Tour, but would later be disqualified after he was caught attempting to cheat a drugs test. The rider in front of him seemed to be having trouble providing a urine sample, arousing the suspicions of the doctor in charge of the test and causing him to look more closely. He noticed that the rider was hiding a clear tube in his hand as he tried to give the sample and demanded that the man pull up his jersey, which revealed that the tube snaked up his side to a condom filled with someone else's - drug-free - urine held under his armpit, the idea being that by squeezing the tube he could appear to be urinating (the process is described in full gory detail in Willy Voet's book Breaking The Chain). The doctor then demanded that Pollentier also pulled up his jersey and discovered that he was fitted with the same device.

According to Oliver Dazat's book Seigneurs et Forcats du Velo (Lords and Slaves of the Bicycle), Pollentier revealed that he had experienced problems coming off the drugs he had taken while cycling, possibly intending to provide a warning to younger riders. Dazat says that the rider told him, "I've never hesitated to confess that I spent three weeks under the surveillance of Dr Dejonckheere at the St-Joseph clinic at Ostend and that after treatment... I stayed under his control for another two years. Why hide it? It's impossible to come out of a situation like that without the help of a doctor."


Cyclist, writer and comedian Hugh Dennis was born on this day in 1962. Dennis rode the 2007 Étape du Tour, an annual race that follows one stage of the Tour de France that is open to amateurs and held a fortnight before the race proper. He says that he started in 2,600th place among the 8,000 cyclists to take part and finished 3,600th among the 4,000 that completed the stage.