Mirjam Melchers-van Poppel
Born in Arnhem, Netherlands on this day in 1975, Maria Wilhelmina Johanna 'Mirjam' Melchers-Van Poppel signed to Rabobank in 1998 and won three races, including Stage 4 at the prestigious Holland Ladies' Tour. In 1999 she won Stage 5 at the same race and was second at the National Road Race Championship; in 2000 she won Stage 2 at the Tour de France Féminin and second place overall at the Tour de l'Aude Cycliste Féminin and was victorious at the Nationals and the Holland Ladies' Tour. She also qualified for the Olympics that year and was 11th in the Individual Time Trial and 12th in the Road Race.

In 2001, riding with Acca Due O-Lorena Camichi, Melchers-van Poppel won the Thüringen-Rundfahrt; she then went to Farm Frites for three seasons from 2002, winning six times that year, 14 in 2003 (including the General Classification at the Emakumeen Bira, the Damesronde van Drenthe and the RaboSter Zeeuwsche Eilanden) when she was also second at the Worlds Championship and adding the National Cyclo Cross Championship, the Vuelta Castilla y Leon, the National Individual Time Trial Championship, a second Holland Ladies' Tour and seven other victories in 2004. She joined Buitenpoort-Flexpoint Team in 2005 and stayed with them for five years; that year, she won the Ronde van Vlaanderen, the Emakumeen Saria, Stage 5 at the Giro Donne, the General Classification at the RaboSter Zeeuwsche Eilanden and nine other victories.

The 2006 season started well with second place at the Omloop Het Nieuwsblad and another win at the Ronde van Vlaanderen, but she was in a serious crash at the Euregio Tour that left her with a broken jaw, hip and pelvis; she had recovered sufficiently to return to racing the following year, but was apparently still suffering some pain and won five times, more than many riders can even dream of winning in a year, but an uncharacteristically low figure for a rider of Melchers-van Poppel's calibre. By 2008 she was fully recovered and won the National Cyclo Cross Championship for a second time (beating Daphny van der Brand, who had won it for nine of the previous ten years and would win again in 2009 and 2010) and the National Individual Time Trial Championships. In 2009, she won only one race - a cyclo cross event at Sint-Michielsgestel - but was second behind van der Brand at the CX Nationals and seventh at the Omloop Het Nieuwsblad. She was seventh at the Omloop Het Nieuwsblad again in 2010, having signed to the Cervélo TestTeam for that year, and retired at the end of the season.

Frankie Andreu
Born in Dearborn, Michigan on this day in 1966, Frankie Andreu started out as a track rider and by 1984 was good enough to become Junior National Individual Pursuit Champion. One year later he was National Madison Champion and had won silver in the Points race and Team Pursuit at the same Championships, then in 1988 he won two road races, the Capitola and the Pepsi Series, and qualified for the Olympics where he was eighth in the Road Race, which inspired him to concentrate on road racing from that point onwards. The following year he signed to 7 Eleven, with whom he rode at the Giro d'Italia and finished the race; in 1990 he achieved five victories in American events. 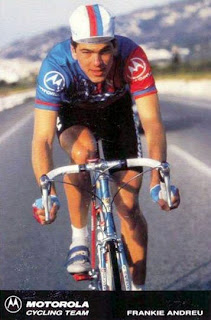 In August 1992, Motorola had signed a promising young rider named Lance Armstrong; Andreu would find his greatest fame riding as the Texan's domestique and was there with him when he won his first Tour stage in 1993, then moved with him to Cofidis in 1997 and to US Postal in 1998 - and when he won his first Tours in 1999 and 2000, after which Andreu retired. Six years later, Andreu changed from faithful domestique to nemesis: he and his wife, Betsy, testified during a court hearing involving Armstrong and SCA Promotions (a company that was attempting to back out of paying a $5 million bonus due to suspicions that Armstrong had doped at the Tour) that, in their presence in 1996, Armstrong had admitted to doctors during his cancer treatment that he had used growth hormones, steroids and EPO. A settlement in which SCA paid $7.5 million (the bonus and legal fees) was reached before a ruling was made. "It's over. We won. They lost. I was yet again completely vindicated," Armstrong told the press, also saying that he believed Betsy may have become confused when she overheard him discussing the drugs he was given by doctors following treatment (which included steroids and EPO); yet both she and Frankie have stuck to their story ever since - and, since Armstrong was stripped of all his seven Tour wins, it looks as though they had good reason to do so. Later in 2006, Frankie admitted that he too had doped, using EPO when training for the 1999 Tour. He also said that his first introduction to doping had come in 1995 at Motorola.

After his retirement, Andreu became a race commentator and still serves in that capacity to this day. He was employed as a director at the Toyota-United team but was sacked for not fulfilling the obligations of his contract in 2006, then the following year became a director at Rock Racing but resigned in 2008 before working with the women's team Proman. 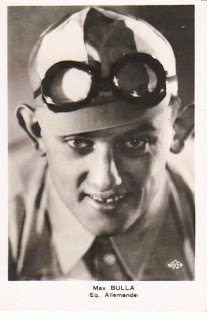 Max Bulla, born in Vienna on this day in 1905, rode the Tour de France as a touriste-routier (independent riders, not signed to a national team and in some cases without sponsorship - though not in Bulla's case, as he was sponsored by the Faggi-Pirelli team) in 1931 and won Stage 2, taking the maillot jaune for one day and thus becoming the only touriste-routier to lead the race in Tour history. He later won Stages 12 and 17 and came 15th overall, the best placing in the touriste-routier category.

Frédéric Moncassin
Born in Saubens, France on this day in 1968, Frédéric Moncassin was a sprint specialist who became famous for his aggressive tactics in the rough, tough bunch sprints (what some riders term "shitfights") at races including the Tour de France (where he won Stages 1 and 19 and came second in the Points competition in 1996), Kuurne-Brussels-Kuurne (which he won in 1995) and the Omloop Het Nieuwsblad (second in 1994).

Moncassin won 33 professional victories, and probably could have won more were it not for the Festina Affair of 1998. He was not implicated in the scandal, but his attacks on the then darling of French Cycling Richard Virenque - he once memorably told French newspaper La Dépêche "he's an arsehole and you can quote me" - saw him become increasingly isolated, one of several riders to be given the cold shoulder in the peloton for "spitting in the soup." He was third at Milan-San Remo in 1998, then retired at the end of 1999 having gone without victory for almost two years.


Cyril Gautier, born in Plouagat, France on this day in 1987, was European Under-23 Road Race Champion in 2008 and won the Youth category at the Critérium International in 2012.