Damiano Cunego
Born in Cerro Veronese, Italy on this day in 1981, Damiano Cunego originally took up cycling as part of the training for his successful career as a cross-country runner; he was spotted and persuaded to give cycle racing a try by Giuseppe Martinelli, who had won a silver medal at the Olympics in 1976, coached Marco Pantani and now serves as General Manager at the Astana team. Like Pantani, Cunego was an extraordinarily gifted climber right from the start; however, unlike The Pirate he was not destined to be a climbing specialist - unusually for a rider who can keep up with the best in the mountains, he could also sprint. With coaching, he became a good time trial rider too: a combination that virtually guaranteed future success at Grand Tours.

Cunego won the World Juniors Championship in 1999. In 2002, he turned professional with Saeco Macchine per Caffé-Longoni Sport and has remained with the team through its merger with Lampre in 2005 and to the present, when it has become Lampre-ISD; he won the Giro d'Oro and Giro del Medio Brenta in his first professional year then came 34th overall at the Giro d'Italia and won the Tour of Qinghai Lake in 2003. In 2004, he won Stages 2, 7, 16, 18 and the General Classification at the Giro, also taking second place in the King of the Mountains and the Points competition. His success was not welcomed by team leader Gilberto Simoni, who had been hoping to take a third victory - according to reports, as he overtook Cunego at one point, he hissed "You're a bastard! You're really stupid!" He then won the Giro di Lombardia at the end of the season, his thirteenth victory of the year; which also won him the World Cup. Aged 23, he was the youngest man to have ever won it.

The following year Cunego and Simoni shared the team leadership at the Giro, but on the very first climb Cunego lost significant time and was ruled out as a General Classification contender; he was subsequently diagnosed as suffering from infectious mononucleosis and would miss several races as a result. In 2006 he rode his first Tour de France and finished second behind Frank Schleck on the Alpe d'Huez before winning the Youth category overall, then he won a second Giro di Lombardia in 2007. The following year, after victory at the Amstel Gold Race and third place at the Waalse Pijl, he was tipped as a contender for overall victory at the Tour but, having finished Stage 18 in 150th place and finding himself 20th overall, he abandoned. He came second at the World Championships that year too, then in 2009 he won Stages 8 and 14 at the Vuelta a Espana. He won no races in 2010 but finished Stage 7 at the Giro in second place and Stage 9 at the Tour in third; in 2011 he won Stage 2 at the Tour de Romandie and was second in the General Classification at the Tour de Suisse, also coming third in the King of the Mountains, then finished the Tour de France in seventh place overall. In 2012 he won Stage 2 at the Giro del Trentino, but the year has otherwise passed without victory.

Cyril Peacock
Born in Fulham, London on this day in 1929, Cyril Peacock became interested in cycling at the age of 15. A friend recommended he join a local club, the Kingston Road CC, then on the 22nd of June 1957 later he entered his first track race aboard a stripped-down road bike and came third. Three months later he won the National Cyclists' Union Junior Championships before joining the Army to complete his compulsory National Military Service.

When he left the Army after two years, Peacock had saved enough money to buy a proper track bike. He renewed his membership of the Kingston Road CC and entered the National Sprint Championship but was eliminated during the quarter-finals - according to The Bicycle: "The last meeting of 1951, the NCU Meeting of Champions, provided a first-class sensation. In the Robbialac Bowl sprint, he was in a disputed finish with Jan Hijselendoorn of Holland, who almost fell on Peacock as they reached the line. Peacock lost the decision - but he gained a lot of admiration."

On Good Friday 1953, by which time he was riding for the Tooting Hill CC, Peacock won the International Champion of Champions sprint at Herne Hill velodrome and received the then enormous sum of £1,000; shortly afterwards he beat French champion André Beyney in a race in France, then went on to become National Sprint Champion. In 1954 he won the Sprint at the Commonwealth Games, then became World Amateur Sprint Champion - the same year, Reg Harris won the World Professional Sprint Championship;they would be last British riders to win the title until Chris Hoy in 2008.


Born in Villa do Conde on this day in 1973, Portuguese rider José Azevedo began winning races in the early 1990s and, by 2000, had twice been National Time Trial Champion and had won a Volta ao Portugal in addition to many other races. In 2001 he signed to ONCE-Eroski, won another National Time Trial Championship and came fifth overall at the Giro d'Italia and then sixth at the Tour de France in 2002 - extremely promising results for a rider's first two Grand Tour campaigns. In 2004 he went to US Postal, where Lance Armstrong called him the best domestique he had ever had; he was fifth overall at the Tour that year (fourth, should the runners-up ever be upgraded now that Armstrong has been stripped of his seven victories). He was 30th in 2005, the year that Armstrong won for the final time, then 19th in 2006 before switching to the Portuguese Benfica team as doing so would allow him to spend more time at home with his family; he won a stage at the GP CTT Correios de Portugal and was second in the National Time Trial Championship of 2007, then had no victories in 2008 and retired at the end of the season. 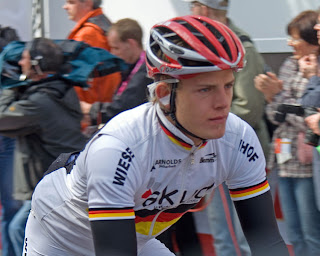 Gerald Ciolek, born in Cologne on this day in 1986, won the German National Championships at Elite level in 2005 - being 18 years old at the time, he was the youngest rider to have ever done so. A year later, he also won the Under-23 World Championship. In 2008 he rode at the Tour de France for Team Columbia (which had changed its name from team Highroad shortly before the race) and finished Stages 2 and 19 in third place and Stages 8 and 21 in second; he was also an integral part of the team's famed lead-out train that led Mark Cavendish to four stage victories. Ciolek chose to move to German team Milran for 2009 and 2010 - in the first year, he finished seven stages at the Tour in the top ten, earning him third place in the overall Points competition; on 2010 he finished top ten four times. In 2011 he went to QuickStep and took two top ten finishes at both the Giro d'Italia and the Tour but failed to win all season, then in 2012 his sole victory was Stage 4 at the Volta ao Algarve - as a result, he has had difficulty finding a place with a ProTour team and will race for Continental team MTN Qhubeka in 2013.

Tomasz Brożyna, born in Bieliny on this day in 1970, won the Polish National Road Race Championship in 1998.